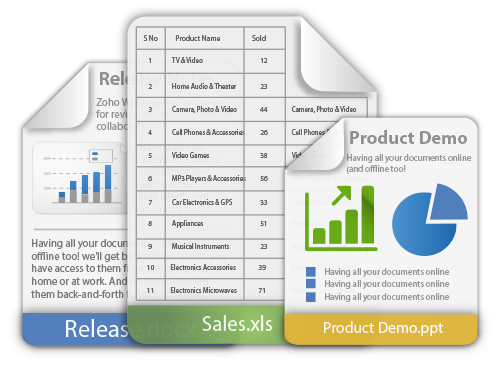 Zoho Docs is a simple document management tool which is available online, free for personal use. It is also available in two paid versions, for the firms. Dropbox is a cloud storage platform, which also have free and paid versions. Now, both firms have integrated their apps together to give a better app.

Using Zoho, one can create a central repository to share folders. The user can also invite other users to view and edit the data in the repository. A task manager tool is also available with Zoho.

Now after the integration between Dropbox and Zoho Docs, Zoho had enabled synchronizing the files in the Dropbox folder with Zoho. The user can choose the files he wants to open with Zoho. Also, the user can edit the word, spreadsheet or presentation documents in Dropbox using Zoho’s inbuilt editors, thus the user can avoid the hassle of downloading third party editor apps.

Via this, the Zoho Docs files can be synced between computers. Also it offers seamless two way content synchronization. That means if a file in the Dropbox is edited using Zoho, the change will be applied to the existing file in Dropbox folder too.

Zoho, the Office productivity suite, recently announced the new functionality in Zoho Writer – being able to view and edit your documents offline. The offline edit functionality is based on Google Gears. Google Docs is […]

Dropbox is an online file storage upto 2GB, file sharing, online backup and file synchronizing service across your computers. All you need is to download the client software, create your user account, link your computer […]

Hojoki – Integrates all Cloud Apps into One Activity Stream

Hojoki is a service that integrates all your cloud apps into one activity stream. You can use Hojoki to have your updates from sites such as Twitter, Dropbox, Evernote, Delicious and Highrise brought under the same roof, and reply to everything much faster. […]