Google’s Android operating system (OS) now claims the largest share of the U.S. consumer smartphone market with 39 percent and Apple’s iOS is in second place with 28 percent, while RIM Blackberry is down to 20 percent, according to June data from Nielsen.

Since Apple is the only company manufacturing smartphones with the iOS operating system, it is clearly the top smartphone manufacturer in the United States. 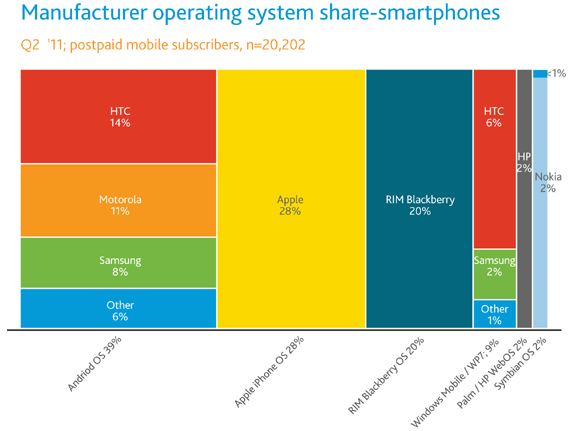 HTC EVO 4G, claimed to be world’s first 3G/4G (WiMAX enabled) Android handset, featuring the Android 2.1 platform running on 1GHz Qualcomm Snapdragon processor. The important features are 8.0 MP camera, HD video capture, HDMI output, Mobile Hotspot capability and HTC Sense. Sprint 4G claims to offer a faster wireless experience than any other U.S. national wireless carrier. The HTC EVO 4G is available only in the US market because of the limited availability of WiMAX network in other parts of the world. The EVO 4G is priced at USD 199 along with a Sprint’s 2-year contract. […]

My Tracks is a Free app from Google Inc., which records the path & speed of user, distance and elevation while the user walks, runs, bikes or do anything else outdoors. While recording, user can view his data live, add notes on the path and can hear periodic voice announcements of user’s progress. Also the user can record GPS tracks, can monitor his real time speed, distance and elevation live on the phone, can share outdoor activities with friends via Google Plus, Gmail, Facebook and Twitter and can view their real time location on Google Maps for Mobile. […]