“A fun packed gadget which can shoot like a pro” – It would be the best way to describe this camera. The Korea based Samsung Electronics had rolled out Galaxy GC100, codenamed “Galaxy Camera [EK-GC100ZWA]“ with much expectations. This is the first semi-professional camera to use Android 4.1 Jelly Bean OS. The whole system runs on a 1.4 GHz Quad core processor. 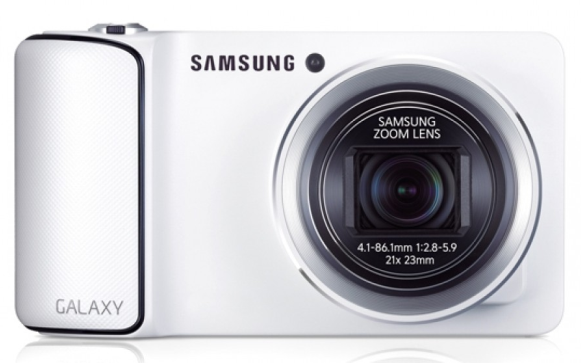 If the mobile phone cameras are excluded, this will be the first camera which could be connected to internet via 3G and WiFi. That means the photos taken by the device can be uploaded to cloud storage in real time. Also a photo backup via cloud storage is offered.

Starting with the camera specifications, the 21x optical zoom option will be the first thing noticed by the buyers. The lens with a focus length 4.1 – 86.1 mm can produce such output, the quality of which is equivalent to an image shot using a 35 mm film camera. The type of focusing used in the camera is TTL Auto focus with Center, Multi and Face Detection AF.

Samsung had used BSI CMOS image sensor (1/2.3″) to enhance the stability of the images even in low lights. One should say that Samsung had been conscious in the making of this device, because it stands in a place between the new generation smartphone/point and shoot cameras and basic level semi-professional cameras.

The flash comes with a variety of options from which the user can select it work at different modes such as Auto, Auto & Red-eye reduction, Fill-in flash, Slow sync, Flash Off and Red-eye fix modes. The recharging time required is 4 seconds.

It homes a 4.8 ” HD Super Clear touch display, which has a screen resolution of 1280×720 pixels. According to Samsung, Galaxy GC100 has Voice Control, Smart Content Manager & Paper Artist.

In the hardware side, the device supports Micro USB, three different external memory slots viz, Micro SDSC (up to 2GB), Micro SDHC (up to 32GB) and Micro SDXC (up to 64GB), a 3.5pi 4pole, Stereo Ear jack and a USB 2.0 port. The users can also connect the device to many other gadgets via Bluetooth 4, PC Sync (KIES, KIES Air), WiFi 802.11 a/b/g/n 2.4GHz/5GHz and 3G. It also supports HDMI connectivity. Also it has GPS support via A-GPS and GLOSS.

Samsung Galaxy Note android smartphones is powered by 1.4GHz dual core processor and runs on Android 2.3 (Gingerbread) Operating System. It comes with 5.3″ HD Super AMOLED display with resolution of 1280 x 800 pixels. It is available in India at a price Rs. 34990. […]

Samsung GALAXY Y is for young, dynamic mobile users on the go who want to stay in touch and connected. Android-driven smartphone with exciting apps, faster downloads Wi-Fi connectivity on a more intuitive, enticing UI. Strong processor, with faster download speeds of 7.2Mbps […]

Motion Camera create cool and unique photos with motion in them. Motion Camera blurs movement of objects into to your photos. It helps in save images quickly by a single touch of a button and supports auto focus. It provide with different adjustable motion effects. […]