RootkitRevealer is an advanced rootkit detection utility. It runs on Windows XP (32-bit) and Windows Server 2003 (32-bit), and its output lists Registry and file system API discrepancies that may indicate the presence of a user-mode or kernel-mode rootkit. It successfully detects many persistent rootkits including AFX, Vanquish and HackerDefender.

[advt]Since persistent rootkits work by changing API results so that a system view using APIs differs from the actual view in storage, it compares the results of a system scan at the highest level with that at the lowest level. The highest level is the Windows API and the lowest level is the raw contents of a file system volume or Registry hive (a hive file is the Registry’s on-disk storage format).

Thus, rootkits, whether user mode or kernel mode, that manipulate the Windows API or native API to remove their presence from a directory listing, for example, will be seen by RootkitRevealer as a discrepancy between the information returned by the Windows API and that seen in the raw scan of a FAT or NTFS volume’s file system structures. 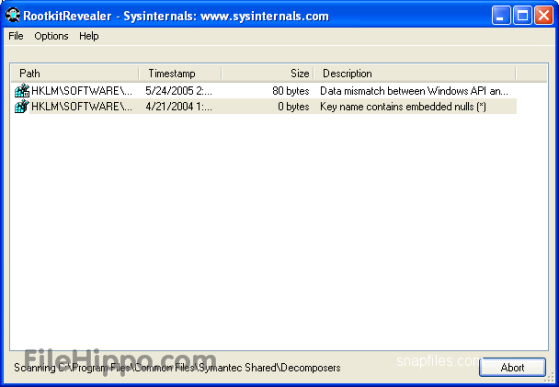 PAST (PAlaeontological STatistics) is a data analysis package aimed at paleontology. Inspired by PALSTAT, it includes common statistical, plotting and modeling functions. It features a spreadsheet-like data entry form, and supports both interactive user interface and scripting. […]

AntiPopureb is a command line tool which can quickly scan your PC for the Popureb.E trojan, removing any infection it finds. It hooks into a low-level hard disk driver, and looks out for attempts to overwrite its own code. If Popureb.E spots a threatening disk write […]