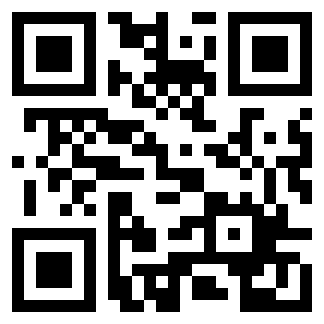 You would have seen some vague black and white images like this one in some mobile application websites and such. Ever wondered what it is and how it works? Let us see.

QR Code, the abbreviation for Quick Response, is a matrix barcode (or two-dimensional code), readable by QR scanners, mobile phones with a camera, and smartphones. The code consists of black modules arranged in a square pattern on white background. The information encoded can be text, URL or other data.

Tr scanning the QR code represented in this article. It represents this website https://teck.in ! Generate your own QR code!

The QR code carries meaningful information in the vertical direction as well as the horizontal, hence the two-dimensional term. By carrying information in both directions, QR code can carry up to several hundred times the amount of data carried by an ordinary bar codes.

QR code is much useful than a standard barcode, as it can digitally represent more data, including url links, geo coordinates, and text.

Common in Japan, where it was created by Toyota subsidiary Denso-Wave in 1994, the QR code is one of the most popular types of two-dimensional barcodes. QR code is intended to allow its contents to be decoded at high speed.

QR Codes storing addresses and URLs may appear in magazines, on signs, buses, business cards, or on just about any object about which users might need information. Users with a camera phone equipped with the correct reader application can scan the image of the QR Code to display text, contact information, connect to a wireless network, or open a web page in the phone’s browser. This act of linking from physical world objects is known as a hardlink or physical world hyperlinks.

Google’s mobile Android operating system supports the use of QR codes by natively including the barcode scanner (ZXing) on some models, and the browser supports URI redirection, which allows QR Codes to send metadata to existing a, while mbarcode  is a QR code reader for the Maemo operating system. In the Apple iOS a QR Code reader is not natively included, but some iTunes Apps, for free, are available with reader and metadata browser URI redirection.

QR Code is capable of handling all types of data, such as numeric and alphabetic characters, Hiragana, symbols, binary, control codes and Japanese input methods like Kanji, Kana. Up to 7,089 characters can be encoded in one symbol.

Small Printout Size: Since QR Code carries information both horizontally and vertically, QR Code is capable of encoding the same amount of data in approximately one-tenth the space of a traditional bar code. (For a smaller printout size, Micro QR Code is available)

Dirt and Damage Resistant: QR Code has error correction capability. Data can be restored even if the symbol is partially dirty or damaged. A maximum 30% of codewords [ 1 codeword=8bits] can be restored.

QR-GPS is a Plugin for QR Droid app has the ability to create a QR code from your current location, using your GPS or Network providers and can share that location. QR-GPS Plugin and QR Droid, together can get your GPS location automatically and generate a QR code from it. […]

GOQR.ME is a free online QR code cre­ation tool. QR Codes , business cards, t-shirts, mugs and more. The free of charge service, is provided without warranty of any kind, either expressed or implied, including, but not limited to, the implied warranties of merchantability and fitness […]

QRpedia is a mobile Web based system which uses QR codes to deliver Wikipedia articles to users, in their preferred language. QR codes can easily be generated to link directly to any Uniform Resource Identifier (URI), but the QRpedia system adds further functionality. […]