mintBox is a miniature fanless PC based on AMD G-Series APU. It is actually a fit-PC3, produced by CompuLab, which has Linux Mint pre-installed. It is a tiny, silent and versatile PC and comes packed with connectivity. It offers powerful graphics, low-power and rich I/O.

mintBox is the official name of fit-PC3, when it comes with Linux Mint. Linux Mint is a Linux OS for desktop computers, based on Ubuntu/Debian. Linux Mint aims to be a modern, elegant and comfortable OS which is powerful and easy to use. Mint provides full multimedia support via software such as Java and Adobe Flash.

The device features a die cast solid metal case which acts as a passive heat sink. The device is unique, robust and well engineered. It doesn’t need a fan to cool down its components. The mintBox is completely silent, other than the noise from its internal HDD. 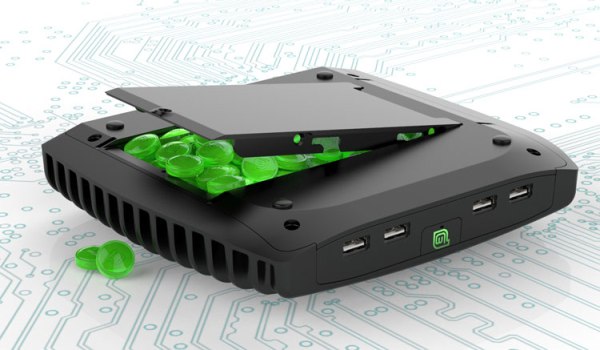 The mintBox has USB ports, Ethernet, WiFi, Bluetooth in connectivity options and feature an HDMI port & a DVI adapter. Now, the Linux Mint team had launched another miniature PC in the series, named the mintBox2.

Samsung’s announced Galaxy Tab 3 10.1-inch tablet, which will be powered by Intel 1.6-GHz dual core processor, the first Intel-powered Android tablet. It will be have 1GB RAMTFT display of 1280×800, 16GB or 32GB of internal storage, 64GB microSD slot and supports 3G and 4G networks. […]

Samsung to merge its “bada” smartphone OS with Tizen, an open source operating system project the company is conducting with Intel. After the integration, Tizen will support mobile apps written with bada’s SDK. The Tizen project incorporates some technology from MeeGo project. […]

Intel officially launched ‘Haswell’, the fourth generation processors in India. The processor offers comparatively better battery life, graphics experience and a faster CPU than its predecessors. Officials expect that the Haswell can perform better and can deliver significant gain in battery life along with significant CPU performance and enhanced Graphics. […]