Hewlett Packard had been one of the forerunners in the personal computer industry since they launched laptop computers. The laptops which weigh less and had the latest systems installed made HP a hot favorite. But the triumphant entry of tablets into the world market changed the definitions. The upper hand of many top guns were questioned by numerous companies who produced tablets and smart phones. HP and likes entered the market little late and this made the competition tougher.

The icy reception that they received in the segment made HP rethink about their strategy. Hence they decided to go back to their playground and their R&D wing came up with the idea of a mobile, all in one PC. The result is named as HP ENVY Rove 20. Whether the device can keep justice to its name is yet to be revealed, but HP had come up with the specifics and price tags of the product. 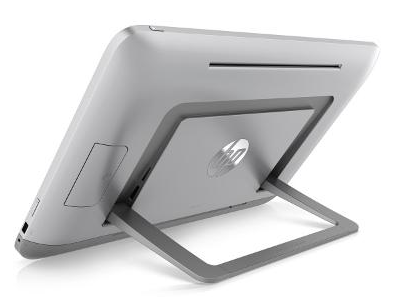 The device homes a 20-inch IPS widescreen HD+ panel which has 10 touch points. The device is powered by Intel’s latest  “Haswell” Core i3 processor with integrated Intel HD-4400 Graphics.

There’s a 4GB DDR3 SDRAM and 1TB SSHD [Solid State Hybrid Drive] Hard drive with 8GB cache. The inclusion of SSHD is a conscious as well as a mature move made by HP. SSHD stand ahead of both traditional HDD and SSD. It has the speed and performance that SSD offers and has the huge storage capacity that HDD can offer.

HP had added three USB 3.0 ports to the device, one charging port on the right, and two ports on the left. Apart from charging ports, it also has a flash card slot.

The device has latest Bluetooth v4.0 installed. And for connectivity, they have added 802.11ac.

The rotation button makes it easy for the user to spin the screen to portrait mode. Also one can adjust the screen for someone sitting across. HP had added Beat Audio with a front-firing speaker bar sitting at the edge of the bezel for an enhanced audio experience.

The device also comes with a wireless keyboard and mouse for the “old school” users. Since Haswell is used, the internal battery can last over three hours run-time.

Overall, HP had made a new generation PC with the facilities of a tablet as well as desktop PC, which can be carried in bags.

Aakash tablet computer which is designed in India as a low cost but full functioning device launched for students across the country. The price of the device is Rs.2200. But the Government will subsidize the cost by 50%, so a student would have to pay only Rs. 1100 for the device. […]

Chip maker Intel had joined hands with a group of Taiwanese companies and a government research centre on a project meant for reducing Data centre operating costs. IT majors including Google and Microsoft are also […]