Gaana.com is a popular web based music website, which allows users to browse through a fair collection of categorized songs and play their dearest tunes online. The site is quite different from the primitive web based music players, the UI makes it feel different. 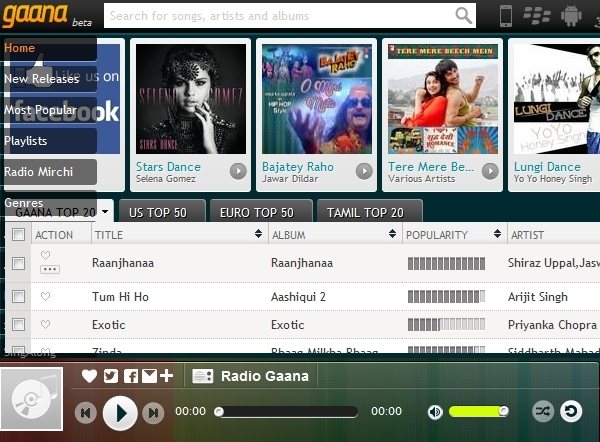 SingAlong is a Karaoke application which had been added lately, which also features a list of Karaoke songs. Users can pick a song, sing along with it and share the scores with friends.

Since this is the smartphone era, Gaana.com also offer a cross platform version for phones, called Gaana Mobile. It is available for five different platforms such as iOS, Android, Windows Phone, Java and Blackberry OS.

The mobile version provides the ability to make user’s own playlists or hear favorite playlists suggested by Gaana.com and sync them across the web and phone. It also allows the users to search from over 1 million songs, whether it’s English, Hindi, Bengali, Punjabi, Marathi etc.

The Gaana.com offers smart recommendations, which prompt the users to listen to similar songs, artists, or albums. It also has the easy sharing feature, through which user can share their favorites with friends on Facebook, Twitter, or by email.

Gaana Mobile can be downloaded online.

Spice Mobility has opened two exclusive stores dedicated to Android devices, one of them is in Noida at the Great India Palace Mall and the other store is in Koramangala, Bangalore. The stores are officially called as AndroidLand. […]

Blink lets you customize your android’s LED alert in your way. If you don’t want the phone to ring but still want to know when someone is contacting you then Blink can make your screen simplex LED notification. By customizing can check any alerts with a quick glance at the LED light. […]