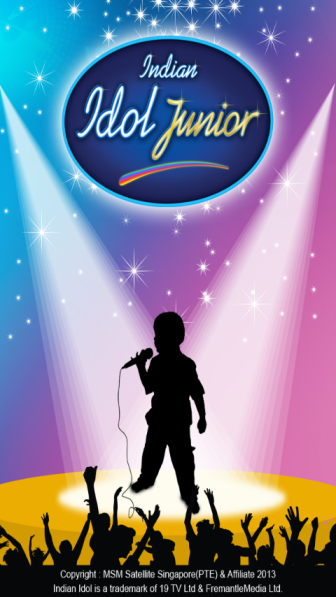 Indian Idol Junior is a music reality show which is being broadcasted in television. Since a numerous audience uses smart devices for watching their favorites, Indian Idol team had decided to go for the experiment and hence resulted in Indian Idol Junior app.

The app is free and is cross-platform, which is available in iPhone, iPad, Android and Windows Phone formats. The makers have tried to include some attractive features to the app so that its audience stays interested.

One of the features are Bachpan ki awaaz,which prompts the user to record their voice into the app and plays a sound, which sounds like the user’s voice as a child. It can be shared on Facebook and Twitter too.

Another app is Leave a Question, using which the user can get answers to their questions from the Judges, Hosts and the Contestants. Users can also create their own Indian Idol Avatar which can be customized.

A game called Catch the Musical Notes is also added, in which the musical notes falls down and the users have to catch as many as they can before the time runs out. Users can compete with their friends on SNS like Facebook & Twitter. Another included game is Puzzles, which is a jigsaw puzzle game based on Indian Idol.

Microsoft India announced ‘I unlock Joy’ initiative which is a unique Application Development and Submission Program, where technology professionals and students get to receive Windows Phones. It has started from November 1, 2011 and will continue till March 30, 2012. […]

Nokia Lumia 710 is a lower-end, lower-cost Windows Phone that has less flash memory at 8GB and have new apps found only on Nokia-made Windows Phones with Nokia Drive, which will offer turn-by-turn voice navigation and uses maps provided by Navteq. […]

Maxthon Cloud Browser for Android is a fast, secure and easy to use web & mobile browser. It is the first multi-tab browser with Cloud Services including Cloud Tabs, Cloud Download and bookmarks/favorites sync. With its cool design and advanced features, the browser delivers a fresh browsing experience. […]