Google’s much awaited Google TV has been out with Sony releasing the new HDTV powered by Google Android OS for the US market. The unit comes with lots of easy-to-use user interface and connectivity options. The number of USB ports are four. Powered by Intel Atom processor, Google TV offers simultaneous viewing of streaming video and web content. 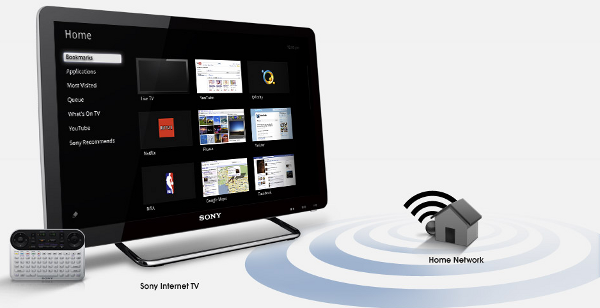 Sony’s Google TV is capable of accepting two HD (High Definition) feeds simultaneously and is also capable of playing up to 1080p resolution videos. Users need to connect Google TV to an ethernet cable or Wi-Fi to get the streaming content. Google TV also easily integrates with your current television service through the HDMI output of your set top box.

For those who are having a High Definition TV equipped with HDMI input, the Google TV Blu-ray player will be enough and is available for $399.99 (~ Rs 17,955). The user also needs to have a cable or satellite box with HDMI output.

Currently Google TV products from Sony will be available through Sonystyle, USA (Sonystyle.com).

What all should i need to set up a Sony Internet TV (Google TV)?

Kaspersky ONE – Anti-Malware Software for Mac, Windows and Phones

Kaspersky ONE is a anti-malware software for Mac, Windows, Windows Mobile, Symbian, Blackberry, and Android (both phones and tablets). It also checked the system resources it was using with Activity Monitor, and found that it consistently used less than 1% CPU time […]

Delhi Integrated Multi-Modal Transit System (DIMTS) has launched the Delhi Transit Bus Info application to make commuter transit a smoother and and more reliable experience. The beta version of the application is available at Google Play store at present and is downloadable for Android powered systems. At present, the app is available for Android devices and internet, and the available details cover the details of cluster buses only. The information for DTC operated buses for the rest of the features will soon be integrated into the application. […]

The native x86 Android will be based on the Froyo release and will soon be available to developers. With this, Atom-based netbooks and tablets can soon run Google’s Linux-based OS. With an x86 Froyo, Android is expected to get established in the netbook market and the nascent tablet market. The opensource mobile OS Android is now catching up on areas such as Netbooks, tablet and smartphones. […]