SmartNamo! Yes Smart Namo is a phone named after one of the top rulers in India, the iconic Gujarat Chief Minister, Shri Narendra Damodardas Modi.

A group of businessmen with a Gujarat connection had formed an ally to launch this phone. As the name denotes, the phone will be a smartphone, with the characteristics of a new generation smart device. As the phone is being designed for Indians, the budget is also handy, it costs around Rs. 14,000 plus. 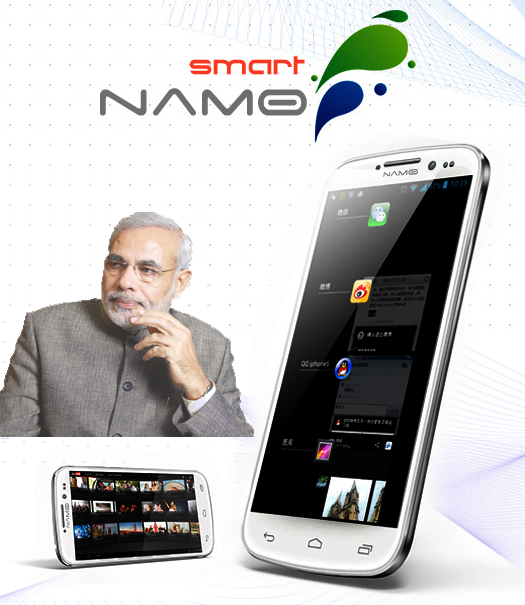 The Facebook page reads ,”SmartNamo is an Android Smartphone dedicated to the Iron Man of India , Shri: Narendra Modi, Gujarat CM and our nation savior. We are a company in China hailing from land of Gujarat and dedicate our Next generation Android Mobile Odyssey (NAMO) to India.”

The phone will have a 5″ display and will be running on Android 4.2.1 Jelly Bean OS. The system will be powered by a MediaTek Quad core processor, with a clock speed of 1.5 GHz. The chipset inside is MT6589 Turbo.

The other two models will have 2GB RAM + 16 GB ROM and 2 GB RAM + 32 GB ROM options. The phone will have twin cameras, one with 13 MP sensor will be the primary cam, which will be at the rear. The secondary cam at the front will have a 5 MP sensor.

The display will be protected by Corning Gorilla Glass 2. The date of launch will be announced soon.

Micromax launched first tablet under its Flagship Canvas series, named Canvas Tab P650 which is priced at Rs 16,500. The tablet sports an 8″ IPS display and it features an aluminium body. This tablet runs on Android 4.2.1 Jelly Bean OS, which can be upgraded to higher versions. […]

Micromax India launched its new phone in India, the Micromax Canvas 4 in an official event. The phone is priced at Rs 17,999. It features a 13 MP rear camera with five elements lens and a 5 MP front facing camera for video calling. The device is powered by a 1.2 GHz quad core processor and runs on Android 4.2.1 Jelly Bean OS. […]