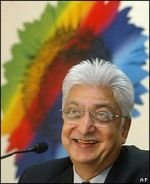 After Narayana Murthy, now it is Wipro Chief Azim Premji against reservation and reiterates importance of merit based employment in his company.

A day after Manmohan Singh asked industries to broadbase employment and make it representative, Wipro chairman Azim Premji made it clear that his firm would recruit people only on the basis of merit thus ruling out reservation at Wipro.

Responding to a question on the proposed move to reserve 27 per cent seats in higher educational institutions for Other Backward Classes, Premji said, “We appreciate the compulsions the country is going through in terms of reservation. But we (Wipro) are an organisation which requires selection on merits.”

Source: No job reservation at Wipro.

Here is the sarcastic version of Premji’s comments. Someone spend good enough time in coming up with this interesting write up! Interesting read!

We should influence ICC and make rules so that the pace bowlers like Shoaib aktar should not bowl fast balls to our OBC player. Bowlers should bowl maximum speed of 80 kilometer per hour to an OBC player. Any delivery above this speed should be made illegal.

Also we should have reservation in Olimpics. In the 100 meters race, an OBC player should be given a gold medal if he runs 80 meters.

There can be reservation in Government jobs also. Let’s recruit SC/ST and OBC pilots for aircrafts which are carrying the ministers and politicians (that can really help the country.. )

Ensure that only SC/ST and OBC doctors do the operations for the ministers and other politicians. (Another way of saving the country..)

Let’s be creative and think of ways and means to guide INDIA forward. Let’s show the world that INDIA is a GREAT country. Let’s be proud of being an INDIAN..

May the good breed of politicans like ARJUN SINGH long live.

I totally agree with him!!!

Thanks to the (wo)man behind this story!

My colleague Surjit forwarded this email attachment. It seems, someone spent good amount of time to prepare this one. I feel, I should acknowledge his work by at least sharing this with you. The powerpoint […]

Yatra.com, the travel portal, launched travel auctions on eBay India, offering holiday packages. eBay customers will be able to bid for holiday packages starting at Rs 1. This is first of its kind in India. […]

Wipro Technologies, the Global Information Technology, Consulting and Outsourcing business of Wipro Limited has announced the launch of its proprietary Easy-Upgrade solution for Oracle E-Business Suite, which enables complete assessment, implementation and management of Oracle Applications. […]