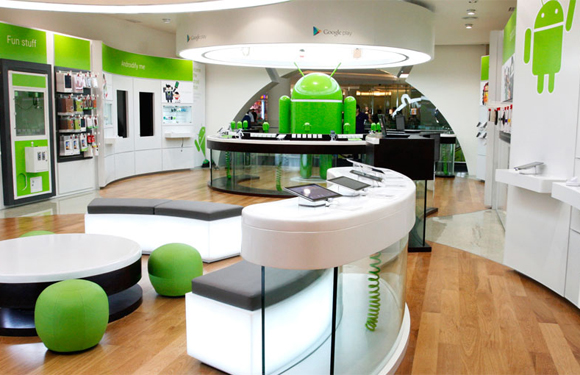 After the success of Android in India, Google now steps forward to the real time retail market with its retail chain Android Nation. The company plans to tie hands with BK Modi’s Spice Global to set up outlets in India, starting with New Delhi by the end of 2013.

Android Nation will promote Android smart phones and tablets of makes Samsung, HTC, Sony, LG and many others, to name a few. The store will act like Android Experience Center where customers can know more about Android apps, download updates, get expert advice and can test the latest accessories for their gadgets.

50 among 900 of Spice Global’s Hotspots will be converted to Android Nation stores once they set up the first store in Delhi. Chairman of Spice BK Modi told that his company’s partnership with Google is not just restricted to India but it will expand its services to the Middle East, Malaysia, Thailand, Indonesia and Africa.

India is the second nation where Google sets up Android Nation stores. The first country to get one was Indonesia. Google also supported Spice Global in bringing Chinese smartphone brand CoolPad to India. Spice CoolPad products will also be sold through Android Nation.

As Google’s main competitors Apple and Microsoft both have retail outlets where customers can try before they buy, Google thinks that potential customers need to get hands-on experience with its products before they are willing to purchase.

Google Cloud Connect is a plug-in for Microsoft Office 2003, 2007, and 2010 that lets you share and simultaneously edit MS Word, PowerPoint, and Excel documents with your colleagues. You get the collaboration benefits of Google Docs, while continuing to use Microsoft Office. […]

Google Street View Stopped in Bangalore Due to ‘Security Concerns’

Google has stopped collecting images for its Google Street View in Bangalore after objections from cops due to the speculations on security concerns. Street View project launched in Bangalore to collect images to give Google users 360 degree views of streets only last month. […]