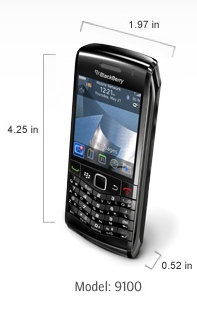 Research In Motion (RIM), the makers of BlackBerry handsets, launched on Thursday a new BlackBerry Pearl 3G model in India.

Blackberry Pearl 3G is touted to be the smallest Blackberry smartphone yet, in India. The Pearl 3G is less than 50 mm wide and weighs 93 g. This phone also features an optical trackpad, a 3.2 MP camera with flash support, a media player for pictures, video and music and external storage up to 32 GB.

In addition, it comes in two keypad variants – 14 and 20 keys along with optical trackpad for smooth and fast navigation. Also it has a display resolution of 360×400 with the battery life lasting up to 5.5 hours of talks on 3G.

RIM has added new features such as social networking applications, access to BlackBerry App World, multimedia functions with 64 games and BlackBerry Messenger (BBM) for people who want to switch from office to social life.

According to a TRAI report, on an average, about 18 million mobile phone subscribers are added every month in India. With the upcoming 3G networks in India, the telecom sector’s history will get changed into exciting times.

RIM did not inform when the new smartphone will actually be available in Indian market. This new model was first announced at the global conference early in April this year and at present the new model is only available in Canada and Australia.

RIM has already launched more than 20 different BlackBerry devices in India since first entry in 2004. RIM stated that they are building applications specific to India and are using the available local talents of developer community.

Research In Motion announced that a selection of free premium apps worth nearly US $100 and one month of free technical support will be offered free of charge to its subscribers as an expression of appreciation for their patience during the recent service disruptions. […]