Today, after an unprecedented move, Telecom operator Aircel and Indian smartphone maker Micromax have signed up a strategic partnership deal to share their retail networks, sales resources and run a device sales activation program in parallel to increase data usage. 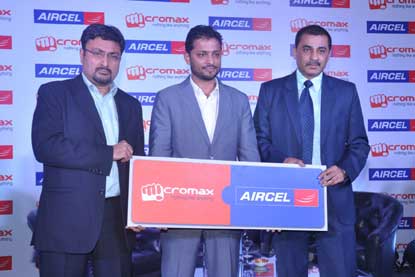 Micromax 3G phones buyers will get 2GB of free internet every month, for first three months and the ones who buy Micromax 2G phones will get 1 GB free. Also the customers will get content worthy of Rs 10,000 on mobile phones including videos, songs & access to Popcorn TV, an internet TV application, for free during the promotion period.

[advt]Both Aircel and Micromax expect that the coalition may increase the sales. Micromax thinks its phones will soon be the automatic choice for the Aircel customers whereas Aircel is aiming to catch the market with its strategic partnership with Micromax, as Micromax has a handsome share in the Indian Mobile phone Market.

Aircel launched GSM mobile services in Pune. Aircel introduced exciting tariff plan to reward high usage in a simple manner. There is an inbuilt reduction in tariff on all local calls wherein the first minute is @Re1, the second [email protected] and third minute onwards it is @30p. Aircel also introduced an inbuilt tariff for lifetime on STD calls wherein the first minute is @Re 1, and the second minute onwards @75p. […]

Nokia N85 – The Mobile Computer for Music, Gaming and Internet