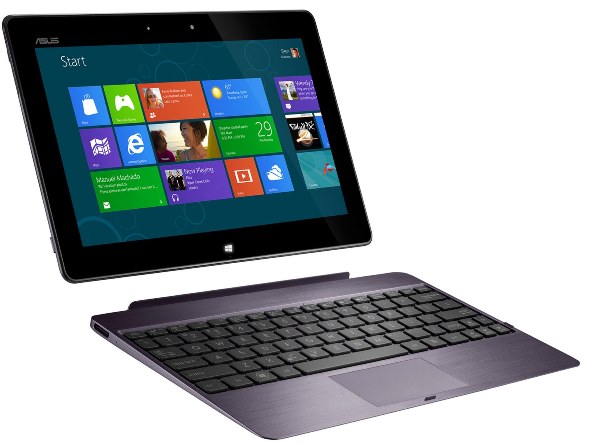 ASUS is a forerunner in the notebook market, yet to place its mark in the tablet market. ASUS was trying to overrun a prime spot in both industries. The competition resulted in the introduction of ASUS Transformer Book TX 300, which is a 13.3″ notebook & a detachable tablet at the same time.

The processor allows the user to switch between apps effortlessly. The Intel Turbo Boost technology 2.0 is able to deliver a speed boost whenever required. They have used ASUS SonicMaster audio technology for better audio experience.

As a tablet, the 128 GB SSD [Solid State Drive] allows the system to launch apps immediately for a faster Windows 8 experience. The ASUS WebStorage ensures secure cloud storage. When the user connects the ASUS tab to its notebook dock, it transforms to a notebook at once, with 500 GB HDD.

The company boasts that the ASUS high speed bridge technology used in the notebook will ensure 5 Gbps data transfer speeds. They keyboard used is a backlit keyboard with ambient light control option, which will adjust its luminosity with respect to the surroundings.

ASUS claims the battery has 5 hours life in notebook mode and 8 hours in tablet mode. The display used is a full HD IPS touch display which has 1080 pixels resolution and comes with a 178 degree viewing angle.

They  have used MaxxAudio to provide EQ control for the ASUS SonicMaster controlled sound system. With a 720 P HD camera in the front and a 5 MP sensor camera in the rear, the Transformer book  comes with a enhanced imaging technology for better images.

The Transformer Book comes with a power chord which is magnetically connected to the power socket. This feature will help users avoid damaging the chord accidentally.