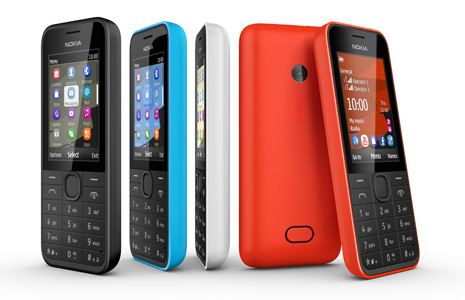 According to the company claims, these phones will have better internet connectivity. All the phones have typical ‘candybar‘ design. These quad band GSM budget phones will be the first ones to bring 3.5 G connectivity at all neighborhoods.

While Nokia 207 is still a single SIM phone, Nokia 208 has single as well as dual SIM versions.

Apart the 3.5 G connectivity, Nokia 207 has apps like Facebook, Twitter and Nimbuzz as built in apps. The Nokia Xpress browser can keep justice to the company’s claim of 3.5 G connectivity. It has a 2.4″ bright display and the company offers 12 hours 2G talk-time, 4.5 hours 3G talk time and 500 hours play back time.

While the Nokia 208 offers Whatsapp along with Facebook, Twitter and Nimbuzz in its built in apps package. It sports a 1.3 MP sensor camera with voice commands to take self portraits and 100 degree panoramas. The maximum picture resolution of the pictures is 1280×960 pixels. The display size as well as the battery life are the same for both phones.

MX745 is a 2.4″ TFT, Dual SIM (GSM+GSM) 262K Color Screen Phone. Music can be enjoyed on One Touch MP3 Player, FM Radio and Scheduled FM Recording. This phone supports a 1.3 MP Digital Camera, Video Recorder and Video Player as well. External Memory can be expanded upto 4 GB with MMC Support. Connectivity options include Bluetooth, WAP and GPRS. Games, Magic Voice, Privacy Protection, Motion Sensor, Mega Bass Speaker and Mobile Tracker are the other features of this phone. Retail price of this phone in India is Rs.4195/- only. […]