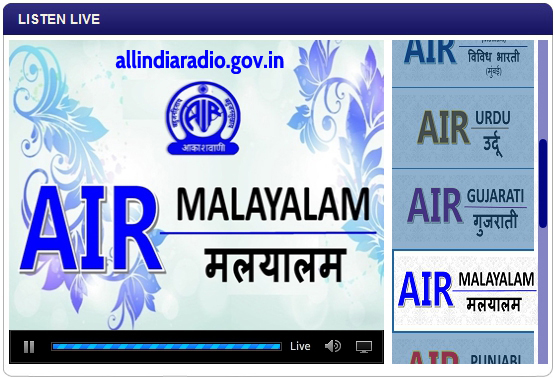 Do you know that, All India Radio (AIR), India’s National Broadcaster, has 414 Broadcasting Centres in India, with 218 full-fledged stations with studios and 196 relay sentres across India, reaching nearly 92% of the country’s area and 99.19% of the total population, having programmes in 23 languages and 146 dialects! Thus All India Radio truly lives up to their motto ‘Bahujan Hitaya : Bahujan Sukhaya’.

You can listen to All India Radio’s live programs in various languages in the AIR website at http://allindiaradio.gov.in

Last week, four regional language channels – Malayalam (Akashavani), Gujarati, Marathi and Punjabi – have been added by All India Radio for live streaming on its website.

All India Radio plans to upgrade its regional channels and make them available through live streaming. Tamil, Telugu, Kannada, Bengali and NorthEast Stations are expected to be Live soon on this website.

It would have been really great if Mobile Apps were released for the Live programs, this rnabling smartphone users across India to listen to listen live at All India Radio.

All India Radio, the premier Public Service Broadcaster, is one of the largest broadcasting organisations in the world in terms of the number of languages of broadcast and the spectrum of socio-economic and cultural diversity it serves. Prime Minister Narendra Modi’s ‘Mann Ki Baat’ speech has already given a new momentum to All India Radio. Hope the next generation developments at AIR will scale up faster.

For subscribers who would like to register/de-register their request for NDNC registry may dial 1909 or SMS to 1909 with keywords ‘START DND’ for registration and ‘STOP DND‘ for de-registration. The National Do Not Call […]

How to Identify the Indian State / Union Territory / Metro a BSNL cellphone belong to?

I came across this table below to identify the home state (Indian) to which a a BSNL (Bharat Sanchar Nigam Ltd) cellphone belong to. For example, if the cell phone number is 9447100100, its first […]