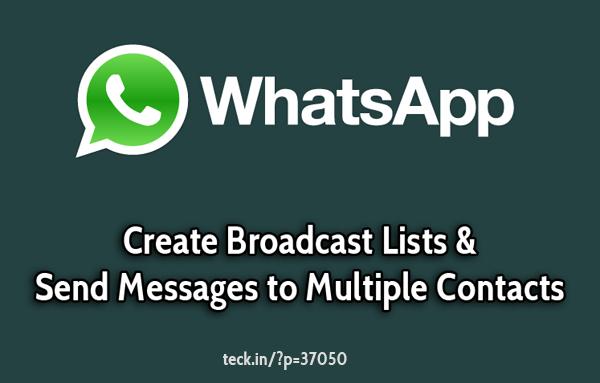 WhatsApp has Groups feature, which enable a group of people to share messages and discuss. In groups, all members of the group can send and receive messages without any restriction. If you are the admin of a WhatsApp group, you can only control who are in the group; but you have no control over the messages sent by them – that means, there is no message moderation in WhatsApp groups.

If you would like to send periodic informational messages to hundreds of your friends, it is a very difficult task to send to them through individual messages. How can we do that without creating a WhatsApp Group? The Broadcast Message feature of WhatsApp may be the best solution for you.

The Broadcast Message feature of WhatsApp lets you send a message to several of your friends at once. In order to be able to send a Broadcast Message to a specific contact, that person must have your phone number saved in their address book.

What is the difference between Broadcast Lists and Groups in WhatsApp? 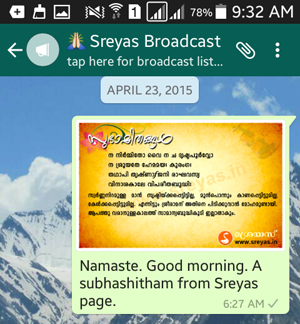 Broadcasting is like bcc (blind carbon copy) on your email. Each recipient then has the option to respond to you individually. For each recepient, it is just like receiving a direct message from you and replying to it, that’s all.

Unlike SMS or email, you can’t send a Broadcast Message to someone if they don’t have your WhatsApp phone number in their contact list. For sending to such people you need to send them a separate message.

It is also a good practice to ask permission from the person with a direct message before adding them to your broadcast list. If they do not have your WhatsApp phone number in their contact list, have them add it to their phone contacts.

How to Create a WhatsApp Broadcast List in Android?

This will create a new list of broadcast recipients. When you send a message to the Broadcast List, it will send to all recipients in the list. The recipients will receive the message as a normal message. When they reply, it will appear as a normal message in your Chats screen; their reply will not send to other recipients in the Broadcast List.
Only contacts who have added you to their phone contacts list will receive your Broadcast Message. If your contact is not getting your broadcasts, check to make sure they have added you to their contacts. Broadcast Messages are a one-to-many communication. If you want your recipients to participate in a group conversation, you should create a Group Chat instead.

WhatsApp Bluetooth Messenger is a smartphone messenger app available for Android phones, which is totally Free. It uses your Bluetooth to message with friends and family without any internet cost. Avoid the cost of SMS by switching to WhatsApp Bluetooth to send/ receive messages, pictures messages. […]