Ultimate Windows Customizer is a customization and tweaking tool for Windows. If you are working with Vista or Windows 7, you can use the program to tailor every aspect of the operating system to your liking from the way the Start menu works to how Windows Media Player looks. It interface is divided up into nine sections that enable you to tweak all aspects of your system without the need to edit the registry.

It is difficult to reveal everything that the program is capable of as there are simply so many options to explore, but a great place to Start is with the customization of Explorer as this is one part of Windows that everyone uses on a regular basis. As well as changing which shortcuts are displayed in the navigation pane, you can also choose which buttons should be displayed in the Explorer toolbar so you can re-add the Copy and Paste button you have been looking for so long.

Continuing to customize Explorer you can also adjust the appearance of icon while the ability to remove unwanted items from the context menu allows you to reduce clutter you can also add shortcuts to items of your choosing if you like. Other options include the ability to change the Startup sound, use videos as desktop backgrounds, logon screen customization and a huge degree of control over the way the taskbar works.

The range of tweaks that can be applied with the Ultimate Windows Customizer is very impressive, particularly for anyone who does not like to get their hands dirty in the registry. Automatic backups are created so you can undo any tweaks you decide you do not like, making this a safe tool for users of all levels of ability to work with.

The customization tweaks in Ultimate Windows Customizer have been classified in to the following sections: 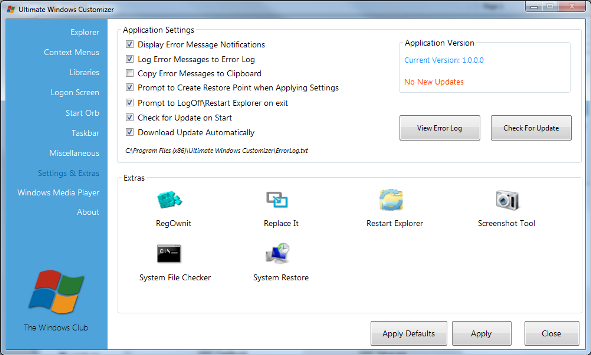 DesktopOK is a small, effective solution for users that have to change their screen resolution frequently. Additionally, the program will maintain the position of desktop icons. It does not have to be installed and can be executed easily from the desktop. […]