TuneWiki is a new way to experience music on your phone. With TuneWiki you can  play songs using internet, buy songs, get the lyrics of both video and audio, translate  songs. TuneWiki currently has agreements with major music publishers, such as Sony, Universal, and EMI to legally use synchronized lyrics in TuneWiki’s music applications. Furthermore, the mobile TuneWiki applications also provide lyrics for streaming radio on mobile phones, and TuneWiki has location-based technology to let users see where their favorite music. 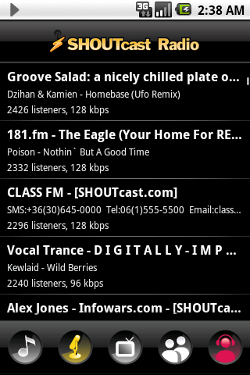 TuneWiki’s social music player provides you with timed and subtitled lyrics in more than 40 languages to your favourite music:

You can also search for lyrics to over 2.5 million songs and translate lyrics in real-time as you are listening to a song. Use music maps and real time Top 50 charts to see what people are  listening to around he world and to discover new music.

Lyric Legend, a new game in the App Store, is a fun, innovative way to bring together music, lyrics and game play. Choose your favorite song from the menu, and then hit the orbs in time with the lyrics. Your score will increase based on how accurately you hit each orb, timed to the music. 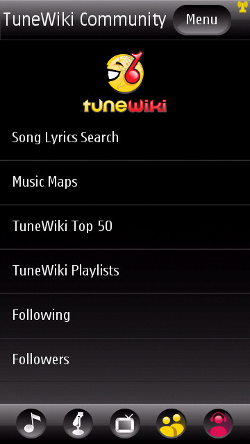 Music Player : When you download the TuneWiki app to your smartphone, your music library will automatically be recognized and imported into the TuneWiki player. Even if you are not connected to internet, you can still play music and see any lyrics that you’ve played before, but you won’t get the full TuneWiki experience (e.g. Internet Radio, Music Videos, Music Maps, Top 50 Music Charts).

The TuneWiki Social Music Player is available for the following:

Music Store : On TuneWiki website you can purchase music by simply clicking the ‘Buy’ button next to a song. You will then be prompted to pay/check out. The purchased music automatically transfer to users  phone when the user  sync his computer and mobile device. Purchase of a single song coast between $0.99USD and $1.29USD.

Videos : Except for the iPhone, iPod Touch and iPad, all of  other platforms, including TuneWiki website, support lyrics with video. On the website, there is a translation button just above the video. User can traslate a song to another language too. To translate lyrics on your phone, go into the menu and choose the language you would like to display.

TuneWiki currently has applications released for iPhone and iPod Touch, Android, Blackberry, Symbian S60V5 and Maemo , with a plugin for Windows Media Player.

Wants to play Lyric Legend Game in TuneWiki? Here is the tutorial for Lyric Legend. Watch it.

With Malayalam Radio, you can stream and listen to music, talk and news from Malayalam radio stations broadcasting from around the world. In this version there are Record stations,Make Ringtones and even Bug are fixed […]