The supercomputer, Tianhe-1A, unveiled at a conference in Beijing (China), is the world’s fastest supercomputer. The system is designed at the National University of Defense Technology in China. This supercompter, based in China’s National Center for Supercomputing, has already started working for the local weather service and the National Offshore Oil Corporation, BBC reports.

The previous speed leader is a computer called Cray XT5 Jaguar located at the Oak Ridge National Laboratory of the United States. Tianhe-1A can perform faster than the Cray XT5 Jaguar. 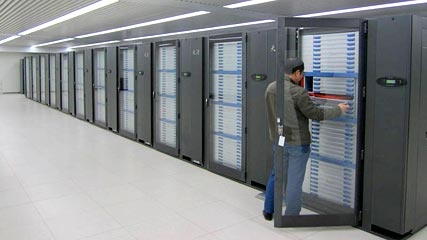 The super computer set a performance record by crunching 2.507 petaflops of data at once (two-and-a-half thousand trillion operations per second), which is 40 percent more than the Cray XT5 Jaguar’s speed of 1.75 petaflops.

Tianhe-1A runs on Linux operating system. While the thousands of individual processors used in the supercomputer are made in America, the switches that connect those computer chips are built by Chinese scientists. The connection and the switches are critical success factor of a super computer, as the faster you make the interconnect, the better your overall computation will flow.

The super computer consists of 20,000 smaller computers linked together, and covers more than a third of an acre (17,000 square feet). It is sized more than 100 fridge-sized computer racks and together these weigh more than 155 tonnes. The Tianhe-1A is powered by 7168 Nvidia Tesla M2050 GPUs and 14336 Intel Xeon CPUs. The system consumes 4.04 megawatts of electricity.

NPR reports that, five new supercomputers are being built that are supposed to be four times more powerful than China’s new machine. Three are in the U.S.; two are in Japan.

Programming computer software that will manage a supercomputer’s thousands of individual processors to work together efficiently is the challenge in using the supercomputer. Supercomputers are used for really complicated problems like forecasting the weather or simulating our planet’s future climate. Until the super machine is put into use and its effectiveness is measured, it will simply remain as a cause of national pride, that’s all.

Mr M K Narayanan told The Times that his office and other government departments were targeted on December 15. A ‘Trojan’ virus was embedded in an e-mail PDF attachment. The virus was detected and officials were told not to log on until it was eliminated. This was not the first instance of an attempt to hack into India’s computers. People seem to be fairly sure it was the Chinese. China has denied any role in the hacking attacks. […]

Google.cn may Shutdown, Issue Over Cyber Threat and Internet Freedom

In a recent blog post titled A new approach to China, Google announced that, Google may shut down their Chinese search engine Google.cn and close down their operations in China. This decision was taken in the wake of the recent cyber attacks on Google and a few other organizations, to get information from Gmail accounts of Chinese human rights activists. The attacks were originated from China. In mid-December Google faced highly sophisticated and targeted cyber attacks on their corporate infrastructure originating from China that resulted in the theft of intellectual property from Google. […]

ISRO built a supercomputer, which is to be India’s fastest supercomputer in terms of theoretical peak performance of 220 TeraFLOPS. It is used by space scientists for solving complex aerospace problems. It is designed and built by VSSC and the cost of this is about Rs.14 crores. […]