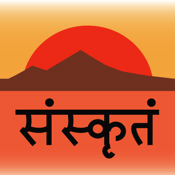 Sanskrit Primer iPhone App aims to provide a self study guide to basic Sanskrit language and serves as a handy pocket reference. No prior exposure to Sankrit language is necessary. Sanskrit is also known as Samskritam or samskritham.

The Sanskrit Primer App has a detailed coverage of the Devanagari script. Devanagari script is also used by other languages such as Hindi, Marathi, etc. The App is compatible with iPhone, iPod touch, and iPad. Requires iOS 3.1.3 or later.

Sankrit grammatical concepts are illustrated using numerous examples. The App provides extensive listing of verb and noun inflection tables and vocabulary that can serve as a handy reference. Over 100 simple Sanskrit conversational sentences are included.

The App inludes Audio clips that serve as a pronunciation guide for all the words and sentences. It provides easy navigation using familiar touch interactions. Above all, the App is fully functional in offline mode as well.

Sanskrit is one of the oldest languages of the world. Sanskrit is used for a large corpus of Hindu, Buddhist and Jain spiritual and religious texts, and thus considered the ‘Laungage of God’. Sanskrit literature encompasses a large and rich tradition of poetry, drama, scientific and philosophical works. While translations are available for most of these texts, it is most satisfying to obtain this knowledge directly from the primary sources.

The iPhone App is developed by Sri. Krishna Varma (KV). Krishna Varma is a Samskritam enthusiast and a software architect with vast experience in mobile application development. He has worked in the US for 15 years and recently returned to Hyderabad and working independently. He has also taken up Vyakaranam studies in Hyderabad and volunteers activities for Samskrita Bharati. He can be contacted at kvarma at gmail dot com.

Orkut Mobile Site m.orkut.com is Now Optimized for iPhone Too

Orkut announced a fully optimized version of Orkut designed especially for use on the iPhone. To access Orkut Mobile, enter http://m.orkut.com in your mobile browser. With m.orkut.com, you can view your personalized home page with status and activity updates from your friends, birthday reminders, read and write your scrapbook, view your friend list, search, and photos. […]

State Bank of India recently launched a service called “SBI Freedom”. With “SBI Freedom”, customers can use facilities like balance inquiry, mini statement, fund transfer, cheque book issuance, mobile recharge and bill payment at any time and place through the use of their cellphones. A customer is registered when he or she sends an SMS to 567676 prefixed with the area code. […]

A new iPhone app “Nude It” has been approved by the apple store, which is available at the iTunes for 99 cents. The app “shows your friends naked! Nude It is a fun application for the iPhone that lets you see through clothes. Simply point your iPhone at a friend, and when the scanning procedure is finished, you will see a picture of a body wearing the some black underwear! […]