Samsung introduced the Galaxy Y Duos and Galaxy Y Pro Duos, a pair of  dual SIM Android smartphones in the Galaxy product family. Using this phone, you’ve got two phone numbers at your disposal, one for work, for instance, and one for your personal life. You can use data according to your plan, regardless of the SIM. 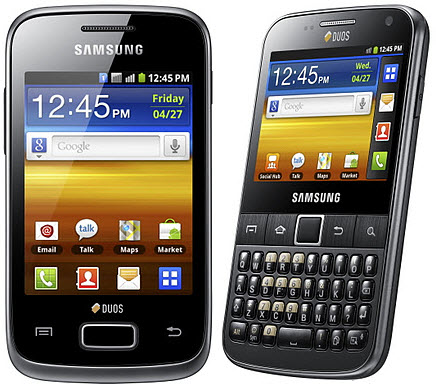 The Galaxy Y Duos is an all-touch Android 2.3 Gingerbread setup with a 3.1-inch QVGA screen, a 3-megapixel fixed-focus camera, and the Android works. It also has a 1,300mAh battery.

[advt]On the slightly higher end of the scale there’s the Galaxy Y Pro Duos, which runs the same Gingerbread and has a full QWERTY keyboard on its candy-bar frame (that keyboard is how you know it’s “pro”). As a result, the screen is a smaller 2.6 inches. In addition to the 3MP back camera, Galaxy Y Pro Duos has front-facing VGA camera and 1,350mAh battery.

Samsung has announced that these smartphones will be released in January in Russia, while there’s no pricing for this yet. The Galaxy Y Duos will then “gradually” roll out to Europe, Africa, CIS, Latin America, Southeast and Southwest Asia, the Middle East, and China. The keyboarded Pro version is headed to Europe, Africa, CIS, Latin America, Southwest Asia, and the Middle East.

After the huge success og Galaxy S2 around the world, Galaxy Note adds to the list of successful phones of Samsung. Just two months after the world wide release of Samsung Galaxy Note phones, company announced that it has shipped more than one million units of Note worldwide. […]

Samsung introduced the Samsung Galaxy Beam, the projector smartphone that lets people display and share multimedia content anywhere. This Android 2.3 phone is powered by 1GHz processor and has 4″ display. It has 6GB RAM + 8GB Internal Memory and its battery capacity is 2000mAh. […]