The world’s first 4G mobile phone network is on schedule to launch next year! Japan’s NTT DoCoMo is going head with plans for a 2010 launch of 4G (Long-Term Evolution – LTE) services on its own. The 4G services will make mobile phones as the centre of their entertainment. LTE will play a significant role in quickly delivering movies and other media over connections expected to hit 300Mbps. 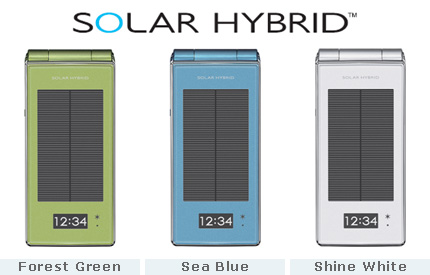 NTT DOCOMO also announced its development of the SOLAR HYBRID (docomo STYLE series SH-08A), a solar-powered, waterproof mobile phone that will go on sale at all DOCOMO sales channels in Japan from September.

The SOLAR HYBRID can be recharged with sunlight as well as electricity. Even if the battery has completely lost its charge, just 10 minutes of solar recharging via a panel on the phone’s body provides approximately one minute of talk time.

The handset comes with an 8-megapixel CCD camera that takes excellent photographs even dim lighting or when objects are moving.

The SOLAR HYBRID’s waterproof body, resistant to water sprays from all directions and submergible to depths up to one meter, enables safe, carefree enjoyment of mobile communication and entertainment in the bath, kitchen, beach, rain or other environments where water is present. [source]

NTT DOCOMO serves over 54 million customers in Japan, including 48 million using i-mode, the world’s most popular mobile e-mail/Internet platform, and 49 million using FOMA, the world’s original 3G mobile service based on W-CDMA. DOCOMO offers a wide range of innovative services for mobile payments, GPS, mobile TV, multimedia content and much more. Now that Tata in India and NTT DOCOMO of Japan are working together for the newly launched Tata Docomo mobile service, we can expect to have iMode full version available in Tata Docomo.

Tata Docomo has signed an agreement with US-based Xius that will allow Xius’ Mobile Touch Transaction (MTT) solution to be tested in Hyderabad, India. The self-service MTT terminals allow customers to pay bills, to top up their prepaid talk time account, to download ringtones. […]

Tata Docomo provides online recharge facility with any preferred amount for prepaid moblie users. It is possible via Debit or Credit cards, major Bank or net banking accounts. The on-line recharges is available for top-up and other Special tariff Recharges. […]