Nokia announced the Nokia Lumia 800 and Nokia Lumia 710 smartphones. Nokia 800 is Nokia’s first smartphone within the Lumia range running the Windows Phone operating system. Both the phones runs on Windows Phone 7.5 Mango Operating System and has 3.7″ touchscreen and 1.4GHz processor and shoots HD video at 30 frames per second. 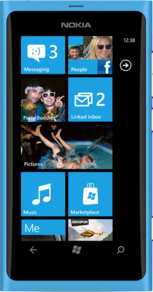 The polycarbonate body is all subtle curves topped with a bright AMOLED ClearBlack display with toughened glass stretching to the sides of the phone. The Back, Start and Search buttons on the front of the screen are set in the glass, so there are no interruptions to the smooth surface. The phone comes in three vivid colours: black, cyan and magenta. On the back, there’s an eight-megapixel auto-focus camera with Carl Zeiss optics. The camera also shoots HD video at 30 frames per second. Social sharing or online storage can happen automatically or with two taps on the interface.

Inside, there’s a 1.4GHz processor and graphics co-processor driving the operating system to deliver a silky-smooth user experience. There’s 16GB of internal user memory, with cloud computing integrated to offer 25GB of free SkyDrive storage for your music and pictures. Communications are handled by a quadband reception, up to HSDPA 3G, WiFi and Bluetooth. Talktime is rated at up to 13 hours, or standby for up to 335 hours. It measures 116.5 x 61.2 x 12.1mm and weighs 142g.

[advt]Every major network is covered, offering sleek integration through communications and contacts to deliver an unrivalled social experience. The browser, Internet Explorer 9, offers fast, smooth performance – as well as broad support for the latest standards such as HTML5 applications.

The Nokia Lumia 800 will be available from November in France, Germany, Italy, the Netherlands, Spain and the UK, across 31 operators. The estimated retail price is €420 ( approxiamtely Rs.29,000), before any local taxes or subsidies. Other territories including Hong Kong, India, Russia, Singapore and Taiwan will see the Nokia Lumia 800 before the end of the year, with even more markets following in early 2012.[source] 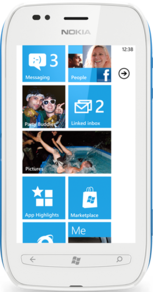 Nokia Lumia 710 offers an accessible entrance to Windows Phone, enhanced with features that bring Nokia’s great strengths to bear. It’s a bright and fashionable phone, offering customization through exchangeable back covers and thousands of apps.

It comes in black and white varieties, with the choice of black, white, cyan, fuchsia and yellow back covers. The 3.7-inch screen offers an 800 x 480-pixel resolution with a ClearBlack TFT for great colors and readability even in bright sunlight. At the rear, there’s a five-megapixel auto-focus camera with an LED flash. The camera can also shoot HD video at 30 frames-per-second.

It’s designed for social, offering full integration of Facebook, Twitter and Linked-In, and photo-sharing can be done in just a couple of taps. The Internet experience on the Nokia Lumia 710 is powered by Internet Explorer 9, offering excellent performance and compatibility with a wide range of modern HTML5 web apps. Added to the Windows Phone software package is Nokia Drive, offering free turn-by-turn navigation and the latest version of Nokia Music featuring MixRadio which offers hundreds of locally-relevant music channels. Also on board is the Xbox Live Hub for gaming and Outlook Mobile for corporate email accounts.

Packing the same 1.4GHz processor, hardware acceleration and graphics processor as the Nokia Lumia 800, the Nokia Lumia 710 offers exceptional performance at this price point. Inside there’s 8GB of user storage memory and 512MB of RAM. It has quadband radio reception, 3G up to HSDPA, WiFi and Bluetooth, so the communications options are covered. The phone measures 119 x 62.4 x 12.5mm and weighs 125.5g.

Available from the end of 2011, the Nokia Lumia 710 will first appear in Hong Kong, India, Russia, Singapore and Taiwan before becoming available in further markets in 2012. The Nokia Lumia 710 is expected to cost around €270 (approximately Rs.19,000) before any local taxes or subsidies. More information on the Nokia Lumia 710 product page.[source]

UC Browser version 3.0.1.400 for Windows Phone 8 and Windows Phone 7.5 has come with a few changes, to give it a sharp edge. They haven’t used any cutting edge technology, yet they had been conscious in the making of this version, so they have indeed brought some changes to this version. The main attractions of the new UC Browser for WP are change in number of maximum tabs, inclusion of Speed Mode, Watch Offline and Desktop mode. […]