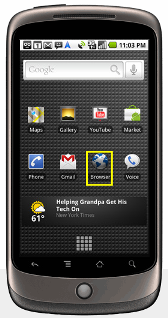 Google announced that the next version of the Nexus One phone will be for enterprise users and might have a physical keyboard. With the new edition, which would be more than a BlackBerry, Google would be getting into the enterprise cellphone market, and posing as a strong competitor to RIM (Research In Motion) BlackBerry. Google is planning to feature a hardware keyboard in the Business Edition of Nexus One.

Google does not make phones, but instead chose HTC to manufacture the Nexus One under Google brand and then sell it with or without a contract through their website. [via pcworld]

According to a research report by iSuppli, Google’s new Nexus One smartphone, which retails for $529 un US, is built from components that cost about $174. The cost of the Nexus One’s various components, including $30.50 for the 1Ghz Qualcomm Inc Snapdragon processor and $17.50 for the Synaptics Inc touchscreen, totals $174.16.

The big gap between the components’ costs and the phone’s price tag did not necessarily mean the Internet giant was making a hefty profit, since the retail price includes expenses such as licensing fees and marketing costs. The bill of materials cited by iSuppli does not include other costs such as manufacturing, software and royalties — all of which are factored in when calculating gross profit margin on a product. It is estimated that, smartphone vendors typically achieve gross margins around 30 percent.

Script Converter is a Google Labs product that allows the user to read a web page in a script of their choice. For example, if the user can understand spoken Malayalam, but cannot read the script, they will be able to view Malayalam web pages in English (Roman) script. This application does not translate any content, instead it just transform the words on the page to its phonetic equivalent in the desired script. […]

How to Kiss, How to Hack, How to Meditate?- Top Google India “How to” Queries

According to the 2009 Year-End Google Zeitgeist India, it seems more people looked for ways to kiss, hack and meditate! The most popular “How to” search queries in Google India were, “how to kiss”, “how to hack”, “how to meditate” and “how to study”, followed by “how to swim”, “how to draw”. “how to flirt”, “how to chat”, “how to concentrate” and “how to download”. Interesting! […]

According to a study by Zogby, the expansion of high speed internet has had the greatest technological impact on the American society over the past decade. High speed internet (24%), Facebook (22%) and Google (10%) tops the list of technology having the most impact on society. […]