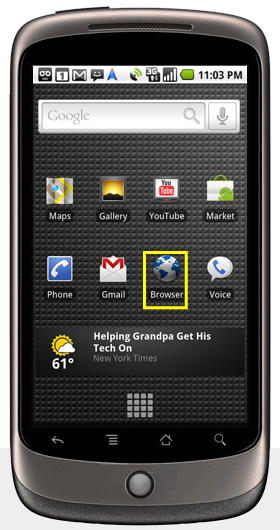 Google announced the much awaited Nexus One phone today. Google Nexus One has a 3.7-inch AMOLED display and runs on Android 2.1 on 1GHz Snapdragon Qualcomm processor. The display is 3.7 inch OLED, HVGA (480 x 800 resolution). Nexus One has a trackball with multi-color notification LED, light and proximity sensors, compass and GPS.

The phone is 22.5 mm thick, weighs 130g. It has inline noise cancellation with two microphones, front and back, which enables Active noise suppression . The camera is 5 megapixel with LED flash. Nexus One has a Stereo Bluetooth and 3.5mm headphone jack.

More homescreen panels — five total — for shortcuts and widgets. The news and weather widget uses GPS to know where you are at, and gets minute-by-minute temperature and humidity readings.

You can buy the phone online at www.google.com/phone, or buy it from a carrier. As of today Google is shipping to US, UK, Singapore, and Hong Kong. Google will add more operators and more devices to this Android phone store.

Nexus One unlocked and without service costs $529. Buy it with service from T-Mobile for $179. To purchase you need a Google account, checkout is with Google Checkout. Before you check out, you can do up to 2 lines of engraving.

SM466 is a Dual Band 2.0″ TFT 265K Color Display Phone. Multimedia features include Digital Camera, Audio recorder, Video Recorder, Video Player and Audio Player. Wireless Connectivity Options include USB Cable for User data interface with PC, WAP and GPRS. It supports External Memory with T-Flash card. Stereo Headset, TV Out and Games are the added features of this phone. This phone supports Polyphonic and MP3 Ring-tones. The retail price of this phone in India is not available. […]