Logitech Revue is a companion box and controller that brings the experience of Google TV to your TV screen. It combines everything on the Web, cable or satellite content, apps, video calling and more that will be wildly popular between 2010 and 2030, until we reinvent interaction again.

Logitech Revue is a set-top box that’s supposed to bring the Google TV experience to your existing home entertainment center, scheduled to ship this fall.

Logitech Revue will deliver Google TV to the 60 million HDTVs already in U.S. living rooms today. Logitech Revue is a system that includes a companion box – an external device that connects to your TV through an HDMI port – and an intuitive controller that’s been designed to take full advantage of everything the Google TV platform offers. The controller is specifically designed to optimize the Google TV experience – combining a compact keyboard, remote control and touchpad.

You get seamless search and access to content anywhere on the Web, from your satellite or cable provider, even some compatible DVRs. Logitech Revue has Logitech Harmony technology built in – so you can have integration with your home-entertainment system. The companion box will have a variety of options available including video calling and a variety of controllers. 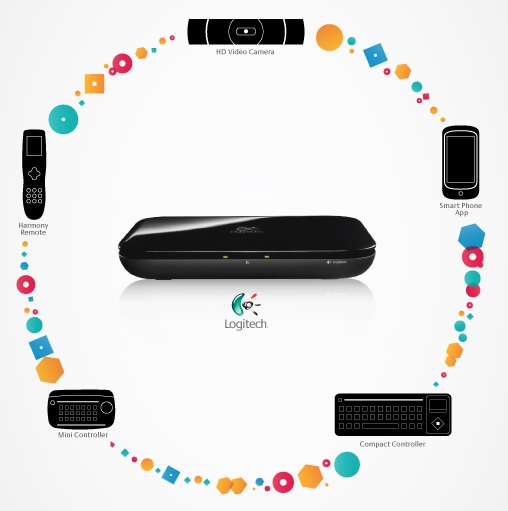 Harmony Link is a combination of hardware and software, currently built into every Harmony remote, which translates commands (such as a Volume Up button press) into infrared (IR) signals that can control many entertainment devices.

The Logitech Harmony smartphone app will be of two versions at launch: one for Android smartphones and one for iPhone and iPod Touch devices. The iPhone app will run on iPad devices as well; a version of the app optimized for the larger iPad screen is planned for a later software update.

You must have the companion box from Logitech for the app to actually control your home entertainment devices.

What is Google TV?

Google TV is television the way it should be. It puts all the things you want to watch – from the hundreds of paid TV channels available today to the limitless number of Web and streaming videos – right at your fingertips. And unlike past incarnations of Web TV, Google TV combines the entire Web and all available TV content in one place, with one interface – eliminating the need to toggle back and forth between multiple screens.

Logitech will also offer a collection of additional products for Google TV, including an HDTV camera and video calling software.

Google to offer paid customised services to corporate houses in India thrugh the Google Enterprise services. With Google Enterprise, employees can do video conferencing with outstation clients or use YouTube video to train their staff or share their presentation via Google docs, which can be customised for the company. […]

Google expects to release Chrome operating system in the “late fall”. The Chrome OS, centred around the web browser, will be designed initially to work on laptop PCs. Chrome OS is one of the few future operating systems for which there are already millions of applications that work. You don’t need to redesign Gmail for it to work on Chrome. Facebook does not need to write a new app for Chrome. […]

Next Google Nexus Phone is Enterprise Phone with Hardware Keyboard

Google announced that the next version of the Nexus One will be for enterprise users and might have a physical keyboard. With the new edition, which would be more than a BlackBerry, Google would be getting into the enterprise cellphone market, and posing as a strong competitor to BlackBerry. Google is planning to feature a hardware keyboard in the Business Edition of Nexus One. […]