Google Dictionary is a free online dictionary service from Google accessible to anyone with an internet connection. This multilingual dictionary serves 28 languages, including the Indian languages Malayalam, Tamil, Telugu, Kannada, Gujarati, Hindi, Bengali and Marathi.

The service is initially launched as part of Google Translate, but now it is a standalone service with address http://www.google.com/dictionary

Google Dictionary integrates Google Translate and Web Definitions into it. For example, you can type a word in English and can find out its meaning in Malayalam. Similarly, you can type a Malayalam word in Unicode and find out various English words meaning the same.

The dictionary service provides Audio pronunciation as well for the English words. Synonyms will also be displayed along with the result. If a word similar to or same as the word that we enter, it is present in any other language, google dictionary shows that result too. It will display related phrases, usage examples as well. 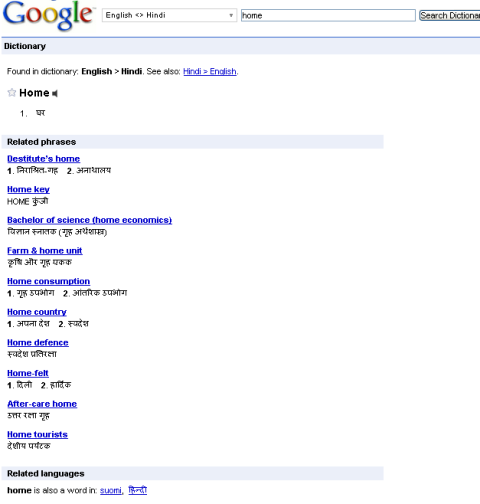 Google SketchUp can be used to create, edit and share 3D models of anything, like redecorate your living room, design a new piece of furniture, model your city for Google Earth. You can export an animation and share it as video. Google has announced SketchUp new version Google SketchUp 7 available for download. […]

Google Chrome browser is now the world’s third-most popular browser, pushing Apple’s Safari to the fourth position, according to a Browser Market Share report. At the end of December 2009, Google Chrome posted a browser share of 4.63%, while Apple’s Safari posted a share of 4.46%. Mozilla Firefox with 24.6% and Internet Explorer with 62.7%. Computerworld estimates that IE will fall under the 50% share mark as early as mid-May if the dramatic negative trend of the last three months holds true. […]