The most feared part in one’s school life is “exams” and the spelling mistakes and bad handwriting were the pinholes which were once able to drain one’s marks to some extent. Wait, once? Yes once. Now the history will stop repeating. Because some inventors from Germany had succeeded in inventing a Smart pen which is able to find “Spell errors” and “Sloppy handwriting” ! 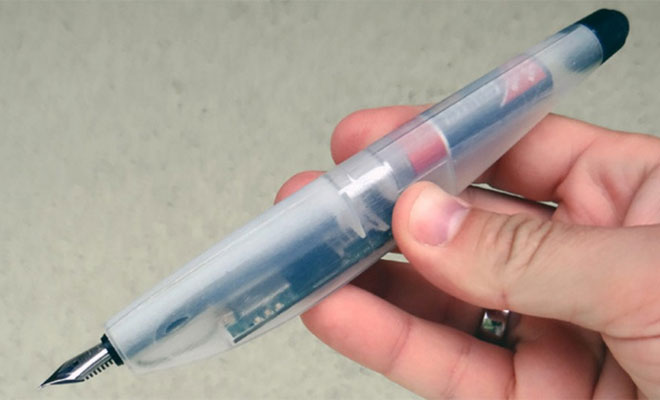 The pen is named Lernstift,  it’s just like any other pen. It’s a normal fountain pen. But it carries a special motion sensor and a small battery-powered Linux computer with a WiFi chip as attachments. These are the heart and brain of this smart pen, which makes it special. They allow the pen to recognize specific moves, letter shapes and a wide range of words. If the pen finds a spell error or bad handwriting, the pen will start vibrating, the ‘ABC news’ reported.

The co-founders of Lernstift, the Munich based firm which invented this smart pen, Daniel Kaesmacher and Falk Wolsky had something else to fill in. They explained how Wolsky’s son’s disability to write lead the duo to this invention. It took them one and half year for developing this funny yet useful pen, the duo said. Now they’ve brought their invention to Kickstarter for finding funds and mileage for their product, which could change the way people “write”.

Solar Headphones to Charge Mobile Devices While Listening to Music!

A pair of headphones that can use solar power to charge mobile devices has been launched, which is designed in the UK, by a Glasgow-based designer named Andrew Anderson. He had launched the OnBeat headphones on crowdfunding site kickstarter. He hopes to have them on sale by early next year. The headphone’s headband is fitted with a flexible solar cell with a charge capacity of 0.55 watts. […]