Karbonn Mobiles launched its first tablet on Google Android platform, named Karbonn Smart Tab 1. It comes with a front facing 2MP camera for video chatting. This tablet is powered by a 1.2 GHz processor, has a 7 inch multi touch screen with 480×800 resolution. Internet options of this tablet are wi-fi service or 3G dongles.

Other features of the tablet are HDMI port, GPS, and 3700 mAH battery through which the device can deliver 8 hours of video playback and 7 hours of internet. Karbonn has also added a 3D gravity sensor and also claims that the Smart Tab can handle video in 1080p. Its price tag of Rs. 6,990.

“We are planning to launch four new smartphone and three new tablets in next three months. Karbonn will be first Indian company to launch smartphone of Google’s Icecream Sandwich platform which is next version of Android after Gingerbread,” 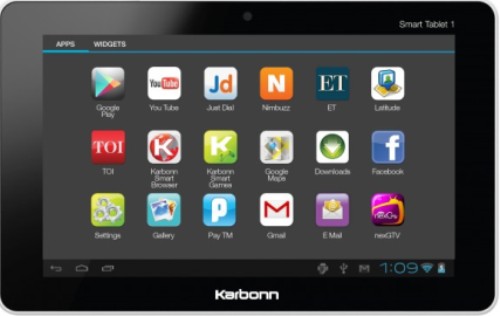 Evo TV is a smart device from Amkette, which can transform an ordinary TV into a smart one by providing One Click access to user’s favorite apps, social networking sites, browser and games. It has inbuilt WiFi and it comes in 3 variants. The prices starts from Rs 8,499 in India. […]