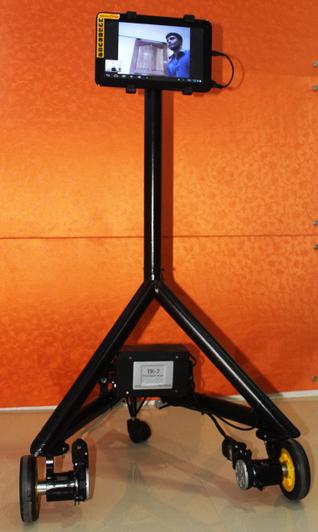 Tele presence robots are such devices which are controlled remotely by human operator(s), typically from a PC over the internet or other kinds of networks by using a specially made remote.

The prototype was developed as part of an Android R&D project of the DIT (Department of Information Technology), which is being implemented by ICFOSS. The tele presence robot prototype TR-7 was fabricated by Ingen Robotics, a local firm focusing on new generation robotics, based on specifications provided by ICFOSS.

[advt]The tele presence robot TR-7 is an affordable one, which is made using locally available components. Users can operate the robot remotely from anywhere in the world using a computer with internet connection and software to control the robot.

TR-7 is a differential drive robot, where the two wheels in the front can be driven independent of each other to allow the robot to take tight turns.

Users can see the location and can hear from the robot using it’s inbuilt camera and microphone. They can establish connection with the robot using a Linux PC on which the communication software and the remote control can be run.

All the hardware and software components used are available under open licenses. Tele presence robots are widely in use for remote inspection in different fields such as offices, space research, marine and underwater, tele medicine, agriculture, military and hazardous environments.

Clingle is a social network connecting people with the world around them. It allows you to share interactive videos when you check-in at locations, leave surprises at your favorite places in town (as audio, video, photo) and make your friends unlock it when they come there. […]

Use Hindi Handwriting to Search Google on Android and iOS Devices

Google had announced support for beta version of Hindi handwriting for Android. The new feature allows users to type in Hindi on a touchscreen using fingers or a stylus and the tool will recognize the characters. […]

BoxTV is a Times BoxTV Media Pte venture, which is aimed at showing quality videos of movies and popular TV shows for free. Its a cross platform app currently available for Android, iOS, Amazon Kindle Fire and Amkette Evo TV. Sooner it will be available for Blackberry OS and Windows. […]