Google Wallet is a free Android app that makes your phone your wallet. It stores virtual versions of your existing plastic cards on your phone, along with your coupons, and eventually, loyalty and gift cards. Simply tap your phone to pay and redeem offers using near field communication, or NFC. Google Wallet will be an open mobile wallet holding all the cards and coupons you keep in your leather wallet today. 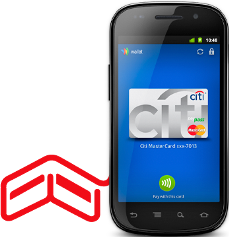 Payments, offers, loyalty, and so much more

Google Wallet has been designed for an open commerce ecosystem. It will eventually hold many if not all of the cards you keep in your leather wallet today. And because Google Wallet is a mobile app, it will be able to do more than a regular wallet ever could, like storing thousands of payment cards and Google Offers but without the bulk. Eventually your loyalty cards, gift cards, receipts, boarding passes, tickets, even your keys will be seamlessly synced to your Google Wallet. And every offer and loyalty point will be redeemed automatically with a single tap via NFC.

The future of commerce starts

Google Wallet is coming soon. When it launches, you’ll be able to use Citi MasterCard cards and the Google Prepaid Card with Google Wallet. You’ll be able to tap to pay at hundreds of thousands of merchants. At launch, Google Wallet will be compatible with Nexus S 4G by Google, available on Sprint. Over time, Google plans on expanding support to more phones.

About NFC (Near Field Communication)

NFC is a wireless technology that enables data transmission between two objects when they are brought within a few inches of each other. Smartphones enabled with NFC technology can exchange data with other NFC enabled devices or read information from smart tags embedded in posters, stickers, and other products.

[advt]Give your smartphone some credit: Tap your phone to pay with the virtual payment cards stored in your Google Wallet.

When Google Wallet launches, it will support these cards:

Tap your phone on the reader. Your phone sends payment, and, at some merchants, offers and loyalty information.

Google Offers are deals on products and services at local or online businesses. Whenever you buy or save a Google Offer, it automatically syncs to your Google Wallet so your offers are always with you. Google Wallet can also store loyalty cards for participating merchants.

At most stores, simply show your offer to the cashier at check out. The cashier will either scan the offer’s barcode or manually type it in. At participating Google SingleTap merchants, you can pay and redeem your offer in a single tap via NFC.

Google Offers are available in different Google products, such as Google Search, Maps, Latitude, and Shopper. You can also learn more about the Google Offer of the Day at www.google.com/offers.

Google were working with merchants to help them support offer redemption and loyalty via near field communication.

A locked wallet is a safer wallet

Google Wallet requires you to set up a Google Wallet PIN that must be entered before making a purchase. This PIN prevents unauthorized access and payments via Google Wallet. Android phones also feature a separate lock screen.

Google Wallet and MasterCard PayPass provide many layers of security.

The secure encryption technology of MasterCard PayPass protects your payment card credentials as they are transferred from the phone to the contactless reader.

What to do if your phone is lost or stolen

Even though the Google Wallet PIN and Secure Element protect your payment card information, you should still call your issuing banks to cancel your cards.

Kinds of companies can partner with Google for Google Wallet

Google continues to partner with many kinds of companies for Google Wallet, including:

Easy Envelope Budget Aid is an online envelope budgeting system and is available as an Android mobile application, optimized for mobile Web, and accessible online. EEBA is a personal and family budget planner perfect for proactive expense tracking and money management. […]

ScoreMobile is fast, easy and free and available on your iPhone, Android, BlackBerry or Windows Phone. ScoreMobile for Android bring stats, scores, odds and news from all the tops sports across the globe right to your Android smartphone. It covers most of the football and cricket matches. […]

Today’s (09-June-2011) Google Doodle is an interactive, playable Guitar in memory of Les Paul, an American guitarist. To make the Doodle available for you always, we have made it avaiable at teck.in for you. You can play the Les Paul Google Doodle Guitar at your convenience. […]