Google expanded Gmail calling capabilities in 38 new languages which makes calling from Gmail more accessible to consumers worldwide, especially those outside of the US and those who don’t primarily use English. You can now buy calling credit in your choice of four currencies (Euros, British pounds, Canadian dollars or U.S. dollars) and there are no connection fees, so you only pay for the time you talk. 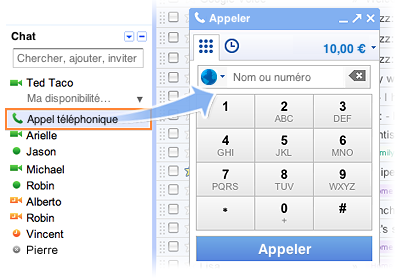 Google will roll out this feature over the next few days, so if it’s available in your country you’ll see a little green phone icon show up at the top of your chat list and you’ll be ready to make calls (you’ll need to install the voice and video plug-in if you haven’t already).

[advt]If you’re a Google Apps user, your domain administrator must have Google Voice and Google Checkout enabled in the administrator control panel in order to be able to use this feature.

Stay connected with your loved ones based abroad at most attractive call charges from MTNL. Bill worries are things of the past as MTNL offers most economical rates for all countries. Enjoy international calls at […]

BSNL launched their voice and video telephony over Internet protocol to its customers. Now any BSNL customer can make audio video calls at will on any landline, mobile or IP phone. The new service will cost 40ps/min for audio calls and Rs 2/min for video calls within the country. […]