This Handwriting input tool was released on April 15, 2015 and it works across your Android phones and tablets running Android 4.0.3 and up. 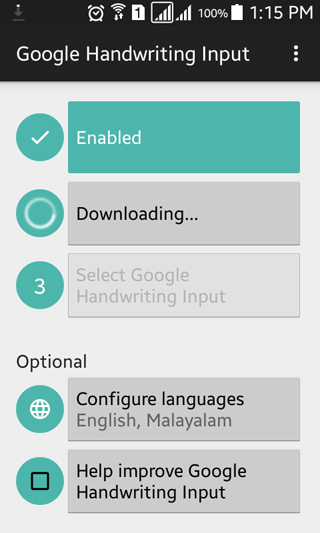 Even if you claim your handwriting is terrible, try it out to see that even it is recognized correctly! In the Android Apps page, you can find that a lot of people vouch for that, on various languages.

Great start Works really well, and even I can’t read my own handwriting.

Google Handwriting Input supports printed and cursive writing, with or without a stylus. It also supports hundreds of emojis, so you can express yourself in any Android app.

Visit Google Play Store and install the app, open it and it will lead you through the steps to enable it.

You can write partial words, write two lines, or rotate your device to landscape orientation. It also support partial overlap in the input. 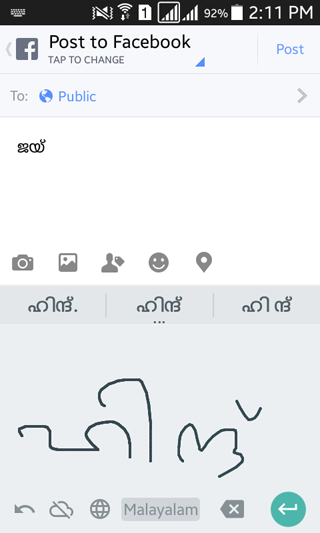 In order to select Malayalam and other Indian languages for Handwriting recognition, in the settings, go to “Input Languages”. You can turn off “Use system language” and choose any languages you like. Enabling more languages may require the download of additional data for the recognition to work.

Visit Google help page if you need any further assistance.

Firefox 3.0.2 is now available in Indic languages – Hindi, Kannada, Telugu, Marathi and Bengali. So now Firefox is localized in over 45 languages. This is done with the contributions from Mozilla community members around […]

Malayalam Aksharam teaches your kid to learn the basics of the language. It is optimised for use with easy controls and a fun interface. App will show each malayalam letter and a word associated with the letter because children to understand and grasp words faster. […]