jEdit is a text editor for programmers, available under the GNU General Public License version 2.0. It is written in Java and runs on any operating system with Java support, including Windows, Linux, Mac OS X, and BSD.While jEdit beats many expensive development tools for features and ease of use, it is released as free software with full source code, provided under the terms of the GPL 2.0. 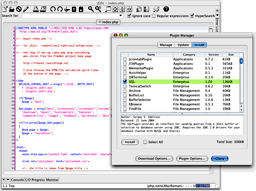 Even though there are great web authoring tools like DreamWeaver, or open source KompoZer, I still prefer to use powerful text editors when working on PHP, HTML or CSS. My preferred text editor is Notepad++. […]

PSPad is a text editor, which is a good replacement for windows notepad. It is especially useful for developers, because of its auto complete and syntax highlighting features. It has features such as syntax highlighting, eye dropper, color converter, spell checker etc. […]