Massachusetts Institute of Technology (MIT) is a forerunner in the education field and one of the most valued educational institutions in the world. MIT is a private research university located in the state of Massachusetts, United States. MIT had been working with a strong emphasis on scientific, engineering, and technological education & research.

MIT OpenCourseWare (OCW) is a web based publication of virtually all MIT course content. OCW is open and available to the world and is a permanent activity of MIT. MIT OCW aims to make available all of the educational materials from its Graduate/Under Graduate level courses online, partly free and openly available to everyone.

“The idea is simple: to publish all of our course materials online and make them widely available to everyone,” says Dick K.P. Yue, Professor at MIT School of Engineering.

At present, OCW offers over 2150 courses online and has many translations to different languages. The MIT course materials are available in both text format and in audio/video format.The courses offered can be found under the Courses Tab in the main page.

[advt]The OCW Scholar courses are designed for independent learners who is not so near to good resources. The courses offered in this section are more fuller than typical OCW courses. The course includes custom created content and materials from MIT classrooms, which are arranged in logical sequences and include videos and simulations.

The Scholar courses are offered under different departments and the categories include Biology, Brain and Cognitive Sciences, Chemistry, Economics, Electrical Engineering and Computer Science, Mathematics and Physics.

The most sought courses of MIT OCW 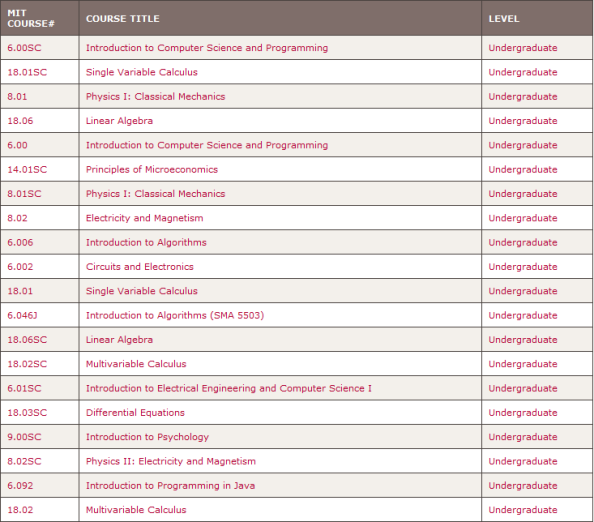 In 1999, MIT Faculty started to consider about the usage of Internet in pursuit of MIT’s mission to advance knowledge and educate students. Thus in 2000, OCW was proposed.
OCW was announced in The New York Times in 2001. In 2002 they published the pilot version with 50 courses. Also Spanish and Portuguese translations added. In 2003, they published 500 courses. Also added Chinese translations.

In 2008, OCW started adding audio and video content to YouTube and iTunes U. Also Course images were added regularly to Flickr. Persian translations were added to OCW. In 2009, 1950 courses were published through 225 mirror sites around the world.

2000 courses were published by 2010 and the Course Champions program was also launched. During 2011, the OCW Scholar courses which were designed for independent learners, was launched. OCW added LectureHall iPhone app.

In 2012, the number of published courses became 2150. Turkish course translations and Korean video translations were added to OCW.

Bookboon – Textbooks for Students and Professionals

Bookboon is an online book publishing company based in London. Bookboon offers freely downloadable PDF eBooks on it’s website, which are exclusively written for Bookboon by professors and experts. […]

Udacity is a futuristic online higher education portal, which offers accessible, affordable and engaging classes that anyone can take regardless the time. Since the demand and expense of higher education is rising to new heights, it’s no more easily affordable for both students and society. Udacity aims to make its students affluent in new age technologies, modern mathematics, science, and critical thinking. […]

TUEBL is a digital platform which connects authors with their fans, via eBook publishing. TUEBL helps market books and authors. TUEBL is accessible to anyone with an Internet connection. Till date, TUEBL had published 33,000 books wrote by 11,000 authors. […]