FoxTab quickly converts multiple videos and auto-shotdown functions for batch conversion. In addition to video conversion,  we can edit and customize video and audio parameters such as  Resolution, Frame Rate, Bitrate, Aspect Ratio and more with FoxTab Video Converter. It has got a very simple interface and hence it is very easy to use. 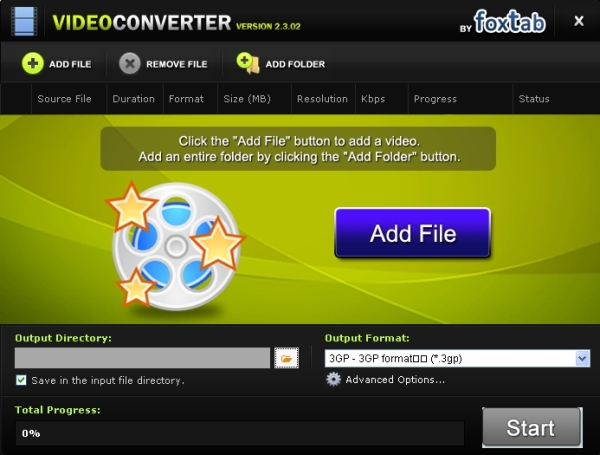 How to Use FoxTab Video Converter

Select the video file you would like to convert, the output directory and output format and press start – that’s it!

The converted video will automatically be saved in the output directory – by default, output files are saved into the program’s folder in My Documents, and they retain the name of the source video.

FoxTab Video Converter lets you convert multiple files – add as much files as you want (files can be in different formats). As video and audio parameters  like Aspect Ratio, Resolution, Frame Rate, Bitrate, Channel are ompletely customizable, you can change them too.

Xilisoft Video Converter is capable of converting standard videos of all popular formats, it also supports the conversion from standard videos to 3D videos as well as the mode conversion among 3D videos. You can convert video, audio, and animated images to play on your iPod, iPhone etc. […]

Media Converter Addon for Firefox helps you to download and convert online videos directly from your Firefox browser without the need for special software. This addon will help you to download your favourite web videos and provide it in the necessary file format for your mobile device. […]

Free Video Converter software converts video between formats such as AVI, MP4, WMV, MKV, SWF, 3GP and MPEG, also to video formats for use in devices such as iPod, iPhone, iPad, PSP, PS3 and Android. elps to rip & burn DVD, and upload to YouTube. There is no adware, no spyware. […]