Firefox Add-ons Compatibility Reporter enables you to send a report to Mozilla letting them know that you have experience compatibility problems with an extension the more people do this, the greater the chance that developers with be able to fix problems in future releases.

Firefox is a constantly evolving browsing and Mozilla has recently decided to increase the rate at which updates are released and this has had a somewhat unfortunate side-effect or Add-on Compatibility Reporter. Before the release of Firefox 10, it was possible to use the add-on to force the browser to assume that other add-ons are compatible, but Firefox now assumes that all add-on are compatible by default. It is something of a shame that this render this particular extension nothing more than a problem reporting tool, but it is still useful in this regard and it is good to see that Firefox itself has evolved.

[advt]It should perhaps come as no surprise that this is how the add-on ends up working, especially as the name includes the word ‘reporter’. While it may be slightly disappointing to lose a previously useful feature, it is worth noting that the add-on can also be used with Mozilla’s Thunderbird and Seamonkey. 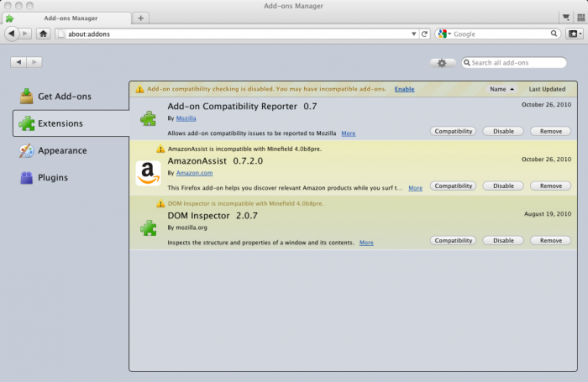 SocialPlus is a Firefox, Chrome and Safari5 extension for Facebook. It allows you to add a number of features to Facebook. Once you install Social plus extension in your browser, you can enjoy an all new facebook with lots of skins, emoticons, don’t like button, photo preview, posts filter etc. […]

MultiCopy is a Firefox add-on that allows copying multiple texts before pasting. It copies and appends text to the clipboard instead of clearing it each time. MultiCopy works best when you’re copy/pasting inside the browser, like from a web page into a Google Doc or comment field. […]