Facebook, the world’s largest social networking site, announced the roll out of an all-in-one messaging service that allows its members to communicate with people outside the social network. The new system will let users own “@facebook.com” addresses. It will let users send and receive instant and text messages in addition to standard email and Facebook notes. Facebook is rolling out the new Messages to everyone gradually. You may request an invitation. 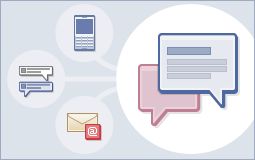 With the New Messages, get all your messages together – texts, chat, facebook messages and email together in one simple conversation. You can include email by activating your optional Facebook email address. With the new messages system, you can control who can send you messages through your privacy settings. Your full conversation history will be available, irrespective of whether you send email to text message or facebook message. You can see everything you have ever discussed with each friend as a single conversation. The messages from unknown senders and bulk email go into the Other folder. No need to have a subject lines or other formalities for simply sending a message to your friends.

According to Facebook CEO Mark Zuckerberg, more than 350 million of Facebook’s half-billion users now actively send and receive messages on facebook website. More than 4 billion messages get sent everyday through Facebook. He expects that, many new generation users will shift to an integrated, cross-platform mode of communications over the longer term, such as the new messaging service.

Its new product will automatically route messages from a person’s most frequently-contacted acquaintances into a main inbox, with messages from other contacts pooled in a separate inbox. Unlike traditional emails, all the messages between two people are threaded together into one long-running conversation, without having any significance to subject line.

Users will also be able to view Microsoft Office documents as attachments to their messages directly.

rcirc is an Internet Relay Chat client written in Emacs Lisp. It blends seamlessly with the rest of emacs, it’s tight, fast. It also has sane defaults. There is little or no reason to customize it because it does what you want by default. It allocates separate buffers for each server […]

Ozonetel launches Voice Buzz for people who connect on Facebook. It can be used by Facebook users to leave their status messages in their own voice and while on the move, without having to pay any service fee for it. This works across landline and cell phone service providers. […]

According to a study by Zogby, the expansion of high speed internet has had the greatest technological impact on the American society over the past decade. High speed internet (24%), Facebook (22%) and Google (10%) tops the list of technology having the most impact on society. […]