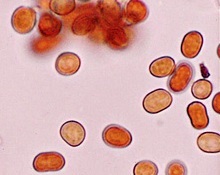 In April 2006 Dr Godfrey Louis, a solid-state physicist at Mahatma Gandhi University, Kerala, published a paper in the prestigious peer-reviewed journal Astrophysics and Space Science in which he hypothesizes that the water taken from the mysterious blood-colored showers that fell sporadically across Kerala, India in the summer of 2001 contain microbes from outer space.

The thick-walled, red-tinted cell-like structures are about 10 microns in size, lack DNA yet still reproduce plentifully, even in water superheated to nearly 600°F.

Louis speculates that the particles could be extraterrestrial bacteria adapted to the harsh conditions of space and that the microbes hitched a ride on a comet or meteorite that later broke apart in the upper atmosphere and mixed with rain clouds above Kerala.

If this theory proves correct, the cells would be the first confirmed evidence of alien life.

And now, after the elections in May 2006, Kerala is again painted with communist red, Achuthanandan Red to be specific! Hope these red colored communist particles have the DNA or the so called backbone to grow and develop the state.

Kerala IT.Com at Technopark from March 13

Have you wondered what “Personalization and Customization is? These two words are used interchangeably many times, while both have different meaning. A brief description is given below, from the point of view of websites / […]

One of Those Production Support Days!

This was forwarded by one of my colleague. I feel I have to share it! 🙂