It comes packed with backup options. You’re able to specify common backup sources with a click, for instance, or choose the specific files and folders you need. Include and Exclude filters help refine exactly what you’re saving, and built-in AES-256 encryption keeps your archive safe.

A capable scheduler will run each backup job automatically at the specified interval. Handy performance controls allow you to limit the program’s upload or download speeds, so it won’t tie up too many system resources.

Duplicati is about saving files and folders, rather than full partitions, so if you’re looking for something that will create an image of your system drive then this isn’t the program for you. It provides various options and tweaks like filters, deletion rules, transfer and bandwidth options to run backups for specific purposes. 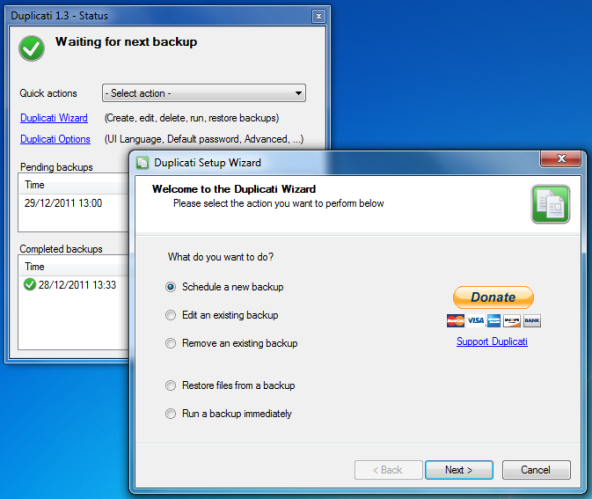 Intel Data Migration Software provides a quick and easy way to transfer your data from a regular hard drive to an Intel Solid State Drive (SSD). The migration program has been designed with user friendly features, which can automatically detect the old and new drives […]

net2ftp is a web-based FTP client written in PHP. It runs on a web server, and that you use a browser. FTP is the communication method to access files on a remote computer. You need it to access your files on the account given by your provider to host your homepage. […]

Seagate DiscWizard is a tool to help you manage Seagate or Maxtor hard drives. It can create a complete image backup of your hard drive, for instance. This image can then be mounted as a temporary drive in Explorer, letting you browse it and restore just the selected files. […]