Disk SpeedUp is a free and fast disk defrag tool to analyze, defrag computer and optimize disks for peak performance. It is easy to use with its intuitive interface. It is an inevitable problem that disks will be accumulated and cluttered with data fragments due to daily frequent operations, such as installing/uninstalling of applications, peripherals, and file downloading/saving/deleting, which lead to PC slowdowns, hang ups, system errors and even crashes.

Disk SpeedUp is designed to help users solve this problem in one or two clicks and optimize disk performance. In comparison with the Windows default disk defragmenter, it can defrag computer more efficiently and conveniently.

Disk SpeedUp is a powerful disk defrag freeware for Windows platform. It is as safe as default Windows defrag. It applies the most efficient algorithm to rearrange files and optimize your disk. Disk SpeedUp works under Win 98/Me/NT/2000/XP/2003/Vista/Windows 7 operating systems. 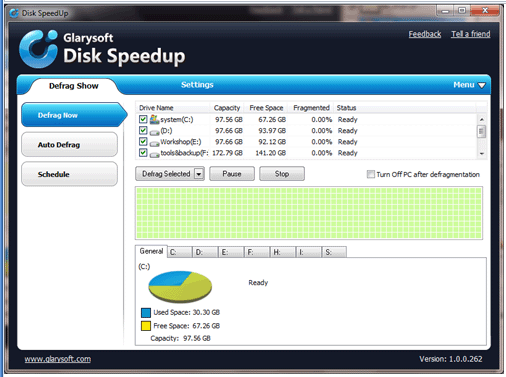 Tiggr is a Web-based rapid prototyping tool and is completely free. Web-based tool allows to creating prototype screen for the desktop, web and mobile. Tiggr can create, share, collaborate and preview web and mobile user interface prototypes. It provide so much features. […]

IsMyLcdOK is a small program but effective solution to easily check for dead/paralysed/stuck pixels on LCD monitors. It is free software for windows. Many manufacturers provide the highest industry standard dead pixel policy. It does not have to be installed and can be executed easily […]

FeedDemon is the most popular RSS reader for Windows, with an easy-to-use interface that makes it a snap to stay informed with the latest news and information. It’s simple single-click sharing lets your friends subscribe to your favorite articles. […]