Cooperative Linux is a free and open source method for optimally running Linux on Microsoft Windows natively. More generally, Cooperative Linux (short-named coLinux) is a port of the Linux kernel that allows it to run cooperatively alongside another operating system on a single machine. 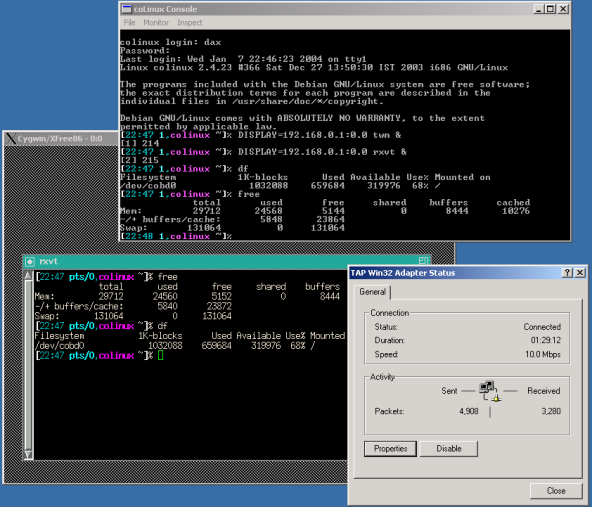 The term “cooperative” is used to describe two entities working in parallel. In effect Cooperative Linux turns the two different operating system kernels into two big co-routines. Each kernel has its own complete CPU context and address space, and each kernel decides when to give control back to its partner.

However, while both kernels theoretically have full access to the real hardware, modern PC hardware is not designed to be controlled by two different operating systems at the same time. Therefore the host kernel is left in control of the real hardware and the guest kernel contains special drivers that communicate with the host and provide various important devices to the guest OS. The host can be any OS kernel that exports basic primitives that allow the Cooperative Linux portable driver to run in CPL0 mode (ring 0) and allocate memory.

Emerge Desktop is a replacement windows “shell” for Windows. In order to replace Windows Explorer as a shell, it provides a system tray, called emerge Tray. It will also provide access to the users programs via a right-click on the desktop, via emergeCore. It has an open API […]

GNU Typist is a universal typing tutor.You can learn correct typing on a regular basis. This is Free Software project under the GNU General Public License. It supports internationalization. There are two types of typing exercises drills and speed tests. […]

Gnuplot is a portable command-line driven graphing utility for Linux, MS Windows, OSX and many other platforms. The source code is copyrighted but freely distributed . It was originally created to allow scientists and students to visualize mathematical functions […]