At Consumer Electronics Show (CES 2011) in Las Vegas, Casio unveiled a Bluetooth 4.0 phone along with a Bluetooth watch that can last two years on a battery charge.

Taking advantage of the low power consumption of the new Bluetooth technology, the new watch powers Bluetooth wireless communication functions with its single button-cell battery, the same kind used in small devices and watches. And it does this without losing any battery life compared to conventional wristwatches. This makes the new Bluetooth Low Energy Watch highly useful because users can wear it everyday just like they expect of a wristwatch, without the bother of the recharging required by typical mobile devices. 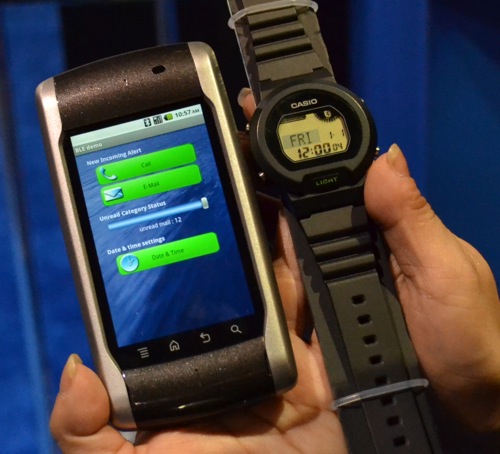 When the phone got a call, the caller ID showed up on the watch. Physically tapping on the watch silenced the ringer—the watch has an accelerometer. That accelerometer could also turn the watch into a game controller like a Wiimote, the Casio rep demonstrating the watch said. Even though the phone looks like an ordinary phone, the phone- watch pair can do some incredible works together.

Embedded Bluetooth capabilities act as a second screen to let you view smartphone notifications like incoming calls and e-mails while your phone is somewhere else. If you misplace your device, there is a phone-finding feature that can ring your handset.

When the phone got an email, the sender’s address appeared on the watch. It was pretty difficult to read, because it scrolled along a few characters at a time. Casio is going to have to put a higher-resolution screen on this watch to make it more useful.

The watch’s long battery life comes from the low-energy mode in Bluetooth 4.0, which has an option to transmit small amounts of data at low bit rates very short distances. You’ll need a new phone to work with the watch, of course, though Casio’s watch app could potentially run on any Android phone.

The combination of Bluetooth 4.0 and the watch’s accelerometer means the gadget could also work as a personal safety system, calling 911 if the user falls down, or a pedometer, Casio said.

Casio didn’t have a release date or price for the watch; Bluetooth 4.0 phones are supposed to come this year. [source1, source2]

QP Optoelectronics announced LightPad at the CES 2012. It extend the functionality and user interface of smartphones, providing the user with expanded utility via built-in 11” high contrast rear projection screen, up to 60” screen in front projection mode, and a full-size keyboard. […]