I had initially decided not to attend Blog Camp Kerala [BlogCamp Kerala] 2008.

I should admit that I was prejudiced.

“There we go”, I thought, “another place where nerdy, techie guys are gonna meet, talk about wordpress plugins/Apple’s coolness/ jihad against proprietary software/making more money by gaming google…. Yawn…. Tell me something new.”

Sure as hell, I wasn’t gonna travel a hundred miles for all that.

At the last moment, Sree, (the chief conspirator of this blog), convinced me. Mostly by saying that I will just have to drag my lazy ass to his home in the morning and he’ll take me to Alappuzha.

And am I glad he did.

It was a super great day. It had super interesting diverse set of people, good presentations, and was hosted at a wonderful place.

Hell, I’ve searched for something to complain about but even the food was real good.

The guys in charge did a great job of organizing a day with zero glitches. I have been to ‘corporate’ camps in which lots of money would get burnt and at the end of the day you wonder where the hell all that money went and who do we blame.  The organizers Kenney, Anand, and Aravind are all young enough for me to call them ‘kids’ and they did a thoroughly professional job. Thanks a ton guys, all of us are grateful.

Me, Nikhil and Sree arrived at about ten at the jetty in Alappuzha and pretty soon all of us got into the first floor of the houseboat and she started moving.

The day began with all of us passing the microphone around and giving a short intro about us and the blogs we write. In addition to teck.in, I mentioned  my original thinkndmuse and my new labor of love anandtranslated.

I was pleasantly surprised to find some of my favorite bloggers around. I’ve found Rajesh‘s works to have an intensity which sort of talked to you viscerally. After we all gave our intros, I found out Rajesh and befriended him. All the pics in this post are the ones he drew in my notebook. 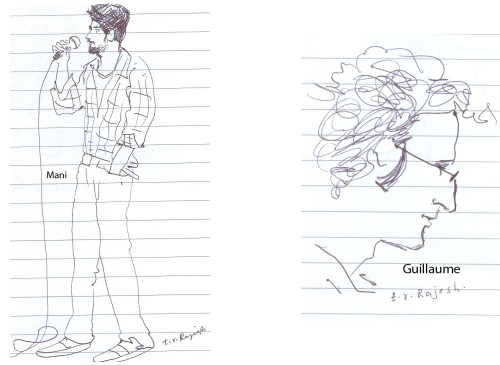 The first talk we had was a very polished on search engine optimisation from Mani Karthik . It is really great to sit through a presentation in which the presenter is a real expert and does know what he is talking about. Believe me, it doesn’t happen often enough.

To use what is seemingly Mani’s favorite word (which he used about fifty times in the space of half an hour), his talk was ‘kickass’.

Uber marketer Seth Godin is fond of saying how the best marketing is the marketing that is done by one of your delighted customers- someone whose life was improved genuinely by your product trying to pass on that info to others, just wanting them too to benefit. I know I am digressing a bit here but it holds a lesson for all of us in our careers, even in our lives.

In the next session, a product I too think is great , Dragon NaturallySpeaking got a very good product evangelization talk from Guillaume Marceau, a French-canadian and a lecturer at IITKM. A guy who has one of his hands in a cloth cast due to repetitive strain injury telling you the benefits, naah the need of using speech recognition software if you spend most of your life asking your fingers to press on a keyboard – it can’t get more convincing that that. Anyways, he has convinced me to at least think of getting more of my work done using Dragon NS.

The next session was by Sridhar who came down all the way from Bangalore even though he is not a Malayalee blogger or a Malayalam blogger. Karnataka Election Watch is a superb example of citizen empowerment due to social media, primarily blogs.  It was great of Sridhar for caring enough to come down and talk about a very relevant topic and of about their activities. 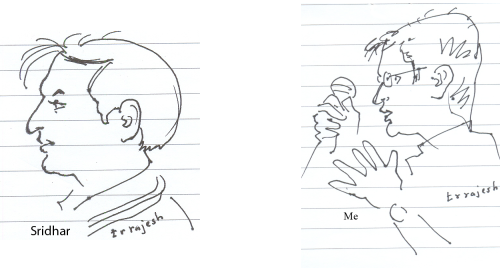 I should admit to losing a wee bit of my cool when I heard some of the snide replies from the kids around when Sridhar asked what politics meant to them. I got the microphone and I think since I was angry at some of the remarks was not able to say all what I wanted to say.

Here is what I should have said. “Republican democracy very new in human history. And very precious. It is by no means the default. If you don’t care enough to guard it, to be aware of it, you will be rudely shocked one day when you find it gone – when you find that suddenly you are in a theocracy,  under dictatorships of different flavours, under a king-god.  And then, it will be too late to realize its value.”

Anways, after that session, we had a sumptuous lunch. The Karimeen especially was delicious.

Normally, the few hours after lunch is the time when conferences are in the semi-sleep mode. Some people move around, go for walks and all, others laze around and talk among themselves, still others doze off. The rest pretend to watch to the presenter. If the organizers are smart, they normally schedule the relatively worse presentations during this time.

But it was after lunch that this Unconference really came alive.

This may sound preposterous but I think technology, politics … whatever sort of exists to enable the creation of great art. And it is only a great artist who can make you giddily happy.

The first presentation after lunch was by Pradip Somasundaran. Pradip gave a sort of Audio Blogging 101 talk – what it is, the ways to do it, the software needed, the resources etc. including even a live demo.

The sort of moment of the day for me was when he played a Japanese song he sang – Sakura. You can hear it here. 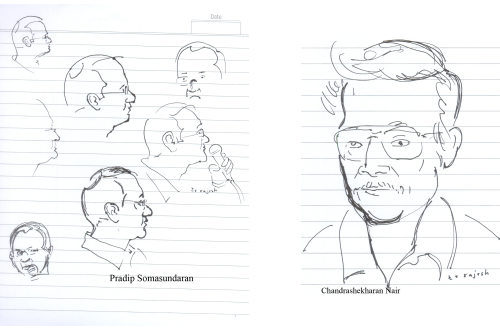 After this, the most interesting man in the conference gave his talk.

One of the big joys of life is to see passionate people. Great stuff is done only by people who are deeply passionate about what they do.

An even bigger joy is to see people who still trying to make a difference at the autumn of their lives. People who are still ready to learn, ready to change, who don’t hold on to the past.

To, Chandrasekharan Nair aka the Kerala Farmer, I’ll just say that sir that you rock.

I was sitting next to a bunch of young kids during the whole of his presentation. After mentioning the advantages of wordpress, Mr. Nair mentioned that he had come to the camp after feeding his cows in the morning and needed to hurry back to milk them. The young kids were forced to sort of confront the enthu and the passion that Mr. Nair has in abundance and their lacks in the same department.

The last session was by Kenny about Campus Blogging. He made a forceful case for having campus blogs. Maybe now we should elect ‘Chief blogger’ instead of a magazine editor in our college unions.

Okay, now that I have reached the end of the post, I’ve found out the things I can complain about.

The folks at the makeshift care parking ‘facility’ charged us fifty bucks.

And… the ppts sucked.  Royally.

Alert … some evangelization and complaining ahead.

Okay, let me say it out loud, at the risk of offending people

. Even when the talks were enjoyable, the Microsoft ppt (or whatever format) presentations that the presenters made, with no exception, were horrendous. Some sucked less than others but that is sad in itself.

I am really passionate about this subject – the need for making ppts suck less. And the need to give great presentations. I should also admit that the battles I have fought inside the huge bureaucratic organizations that I have worked for, for this, are ones which by and large, I have lost.

But I still think I am right. Even when you lose, if you still think you are right, it is tough to stop fighting.

PowerPoint (or Keynote or whichever presentation/slideshow software you use) should ONLY be used as a visual memory marker for your AUDIENCE. That is what they were designed to be used for.

If you are gonna use them for more – like ‘bulletting’, listing down everything that you are gonna say, that is gonna exponentially decrease the quality of your presentation.

Now, let me evangelize something. ‘Presentation Zen’ is a super great blog on giving presentations.

Apologies for the rant.

Coming back to the blog camp. Sajjive, an amazing artist, drew the portraits of all of us. Perhaps the best souvenir that we could have hoped for. Mine is over here.

Use Your Own Custom Domain for Your Blogger Blog

One of my blogger friend runs a health education blog, hosted free at blogspot.com. He is planning to migrate it to a custom domain. He also want to make sure that he won’t loose any […]

The Computer of the Future

An article published in Sci-Tech Today says that the future is a complete wireless world in which computers are worn by the user, electricity gives way to solar and wind power, and improvements in security […]