With the Bluetooth connection between the BlackBerry smartphone and BlackBerry Presenter, users can also walk around freely while presenting. It supports roaming up to 30 feet between the devices. 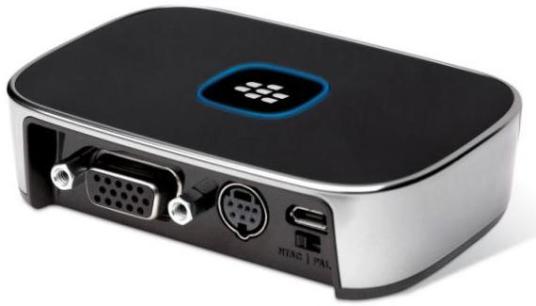 Designed for on-the-go professionals, the BlackBerry Presenter is a small (3.4 inches by 2.4 inches by 0.9 inch) hub that provides connections for hooking up your BlackBerry to a projector or monitor via VGA or S-Video port. It also supports 24 animation and 55 transition styles of PowerPoint 2003 and 2007, and you can even set the time between transitions.

While presenting, view your speaker notes or loop slides when you’re at that big convention. And, when you need to reference information on a different slide to answer that critical question, you can easily freeze your presentation on the overhead display while you search through your deck on your BlackBerry smartphone.

BlackBerry Presenter is being demonstrated by RIM at the Consumer Electronics Show (CES) in Las Vegas this week and will be available at a later date on ShopBlackBerry.com for USD 199.

Kaspersky ONE – Anti-Malware Software for Mac, Windows and Phones

Kaspersky ONE is a anti-malware software for Mac, Windows, Windows Mobile, Symbian, Blackberry, and Android (both phones and tablets). It also checked the system resources it was using with Activity Monitor, and found that it consistently used less than 1% CPU time […]

Remote PowerPoint OpenOffice is a free remote control for PowerPoint and OpenOffice presentations. It just connects to the phone and handles the commands sent from the phone. There is no hidden functionality like a virus and no installation on your PC required. […]

TXTLater BlackBerry app helps to schedule SMS, E-mails and Calls for a select date and time. TXTLater works well on BlackBerry OS 4.2.1 or later. The app is now available for download on the site TXTLater.com site, by following a safe payment method ensured through PayPal. TXTLater supports every OS and every network carrier across the world and is offered at a nominal price of USD 4.99. […]