Joel Spolsky writes on Chandler the once hyped Outlook killer and now, arguably yet another irrelevant calendar program.

The way you make users understand your program model is with metaphors. When you make things look, feel, and most importantly, behave like things in the real world, users are more likely to figure out how to use the program, and the app will be easier to use. When you try to combine two very dramatically different real-world items (email and appointments) into the same kind of thing in the user interface, usability suffers because there’s no longer a real-world metaphor that applies.

The power of metaphors is still an under-appreciated trait in human beings, especially by in inexperienced (and sometimes experienced ones too as seen in the Chandler case) software developers. When you call a folder a ‘Recycle Bin’ or a ‘Trash Can’, you automatically tell people the behavior and the usage of that object or feature. And that is a big deal in getting acceptance.

So that is why this service TeuxDeux is such a joy to see and use. A to-do list as it should be. As similar as possible to what you would normally have on paper and better too. 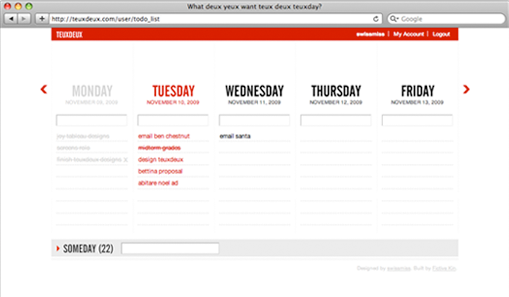 Now as in anything, this approach does have its caveats. Gmail went against many of the metaphors that we were used to and of course we were pissed for some time. But the creator believed he had found a better way to do email. He had thought through it and he turned out to be right.

A TED Talk on the subject.