Electronic goods manufacturer Sony has added a youngster to their flagship Xperia series. The device is named Xperia Z Ultra and will probably launch in India by the end of July. 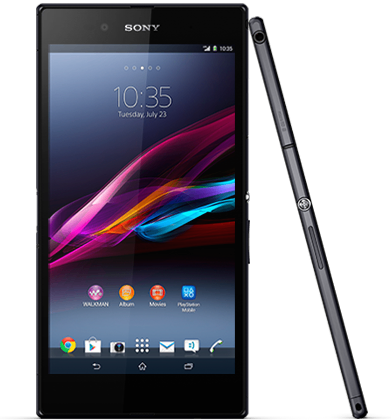 The device homes a 6.4” TRILUMINOS™ Display with X-Reality for mobile, which offer Full HD 1080p view with a pixel density of 342 pixels per inch. The OptiContrast™ panel creates less reflection and produce a clearer view in bright sunlight.

As per the company claims, the phone is ultra slim. The device is waterproof up to 1.5 meters, is dust resistant and has a mechanical strength frame.

The screen is so responsive that its compatible with even a pencil or stylus. The device lets you take notes using Notebook or Sketchbook, you can even take notes from a locked screen and during calls. The high accuracy and low latency offers exact precision, for an authentic pen and paper feel.

It is powered by a Qualcomm® Snapdragon™ 800 Quad core processor which clocks at 2.2 GHz and has Adreno 330 GPU. The Xperia Z Ultra has a built-in LTE/4G modem to ensure faster download/upload rates. The device has Google Android 4.2 Jelly Bean OS.

The device has “Throw” facility, using which a user can throw content from Xperia Z Ultra to user’s WiFi enabled TV through screen mirroring or DLNA, or send their tunes to a speaker via Bluetooth. Also it allows mirroring of user’s phone to TV with an MHL cable so that the user can mirror full user interface on their TV and enjoy movies, games and more while charging.

Last but not the least, the phone features Smart Connect, which is the software that lets user manage all their smart accessories like  Sony Android SmartWatch. It activates the alarm clock when the phone touches the magnetic charging dock.

Spice mobiles launched Spice Pinnacle FHD in India, priced at Rs 16,990. It runs on Android 4.2 Jelly Bean OS, which is powered by a 1.5 GHz Quad core processor. The handset is available for preorder at Saholic while it will hit retail stores from 20th July. […]

Karbonn mobiles has launched Karbonn Titanium S9. The latest phone in the Titanium series sports a 13 MP rear camera and a 5 MP front camera. It runs on Android 4.2 JB OS and has a 1.2 GHz quad core processor with 1 GB RAM. The inbuilt memory is 16 GB, which is expandable. The dual SIM phone homes a 5.5 ” IPS display and comes at a price of INR 19,990. […]

Qualcomm India and Ericsson had demonstrated the Pre-4G technology – LTE TDD mobility at 2.3 GHz in India at an outdoor environment in Gurgaon, Haryana. The demonstration was done using Radio Access Network (RAN), Ericsson’s Evolved Packet Core (EPC), and USB dongles based on Qualcomm’s multimode chipsets which supports 3G and LTE. […]